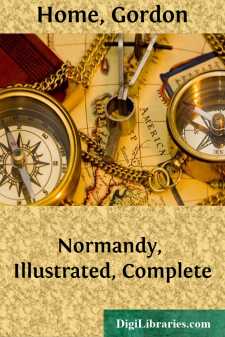 CHAPTER I Some Features of Normandy

Very large ants, magpies in every meadow, and coffee-cups without handles, but of great girth, are some of the objects that soon become familiar to strangers who wander in that part of France which was at one time as much part of England as any of the counties of this island. The ants and the coffee-cups certainly give one a sense of being in a foreign land, but when one wanders through the fertile country among the thatched villages and farms that so forcibly remind one of Devonshire, one feels a friendliness in the landscapes that scarcely requires the stimulus of the kindly attitude of the peasants towards les anglais.

If one were to change the dark blue smock and the peculiar peaked hat of the country folk of Normandy for the less distinctive clothes of the English peasant, in a very large number of cases the Frenchmen would pass as English. The Norman farmer so often has features strongly typical of the southern counties of England, that it is surprising that with his wife and his daughters there should be so little resemblance. Perhaps this is because the French women dress their hair in such a different manner to those on the northern side of the Channel, and they certainly, taken as a whole, dress with better effect than their English neighbours; or it may be that the similar ideas prevailing among the men as to how much of the face should be shaved have given the stronger sex an artificial resemblance.

In the towns there is little to suggest in any degree that the mediaeval kings of England ruled this large portion of France, and at Mont St Michel the only English objects besides the ebb and flow of tourists are the two great iron michelettes captured by the French in 1433. Everyone who comes to the wonderful rock is informed that these two guns are English; but as they have been there for nearly five hundred years, no one feels much shame at seeing them in captivity, and only a very highly specialised antiquary would be able to recognise any British features in them. Everyone, however, who visits Normandy from England with any enthusiasm, is familiar with the essential features of Norman and early pointed architecture, and it is thus with distinct pleasure that the churches are often found to be strikingly similar to some of the finest examples of the earlier periods in England.

When we remember that the Norman masons and master-builders had been improving the crude Saxon architecture in England even before the Conquest, and that, during the reigns of the Norman kings, "Frenchmen," as the Saxons called them, were working on churches and castles in every part of our island, it is no matter for surprise to find that buildings belonging to the eleventh, twelfth, and even the thirteenth century, besides being of similar general design, are often covered with precisely the same patterns of ornament. When the period of Decorated Gothic began to prevail towards the end of the thirteenth century, the styles on each side of the Channel gradually diverged, so that after that time the English periods do not agree with those of Normandy....