Norman Vallery or, How to Overcome Evil with Good 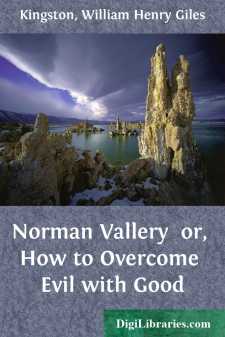 Chapter One. Just come from India.

“Are they really coming to-morrow, granny?” exclaimed Fanny Vallery, a fair, blue-eyed, sweet-looking girl, as she gazed eagerly at the face of Mrs Leslie, who was seated in an arm-chair, near the drawing-room window. “Oh, how I long to see papa, and mamma, and dear little Norman! I have thought, and thought so much about them; and India is so far off it seemed as if they would never reach England.”

“Your mamma writes me word from Paris that they hope to cross the Channel to-night, and be here early in the afternoon,” answered Mrs Leslie, looking at the open letter which she held in her hand. “I too long to see your dear mamma; and had it not been for you, my own darling, I should have missed her even more than I have done; but you have ever been a good, obedient, loving child, and my greatest comfort during her absence.”

Mrs Leslie, as she spoke, drew her grandchild towards her, and kissed her brow.

Fanny said nothing, but, pressing the hand which held hers, turned her eyes towards her grandmamma’s face, while the consciousness that the praise was not wrongly bestowed, caused a bright gleam of pleasure to pass over her countenance.

Mrs Leslie, who had brought up Fanny from her infancy, lived in a pretty villa a few miles from London, surrounded by shrubberies, with a lawn and beautifully-kept flower-garden in front. On one side was a poultry-yard, over which Fanny presided as the reigning sovereign; and even Trusty, the spaniel, who considered himself if not the ruler at all events the guardian of the rest of the premises, when he ventured into her domain always followed humbly at her heels, never presuming to interfere with her feathered subjects. More than once he had been known to turn tail and fly as if for his life when Phoebe, the bantam hen, with extended neck and outspread wings had run after him, as he had by chance approached nearer to her brood of fledglings than she had approved of.

Fanny with her fowls, Trusty, and Kitty, the tortoiseshell cat; and her doll, which had a house of its own fitted with furniture; and, more than all, with the consciousness of her granny’s affection, considered herself one of the happiest little girls in existence. Everybody in the house, indeed, loved her; and she was kind, and gentle, and loving to every one in return.

Her mamma—Mrs Leslie’s only daughter—had married Captain Vallery, an officer in the Indian army, while he was at home on leave, and had accompanied him to the East. She returned three or four years afterwards, in consequence of ill health, bringing with her little Fanny, who, when she went back to her husband, was left under charge of her mother, Mrs Leslie.

Great as was Mrs Vallery’s grief at parting from her child, she well knew, from her own experience, with what wise and loving care she would be brought up.

Captain Vallery was of a French Protestant family, but having been partly educated in England, and having English relations, he had entered the British army....