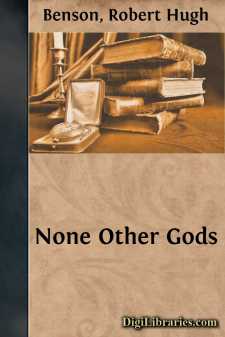 "I think you're behaving like an absolute idiot," said Jack Kirkby indignantly.

Frank grinned pleasantly, and added his left foot to his right one in the broad window-seat.

These two young men were sitting in one of the most pleasant places in all the world in which to sit on a summer evening—in a ground-floor room looking out upon the Great Court of Trinity College, Cambridge. It was in that short space of time, between six and seven, during which the Great Court is largely deserted. The athletes and the dawdlers have not yet returned from field and river; and Fellows and other persons, young enough to know better, who think that a summer evening was created for the reading of books, have not yet emerged from their retreats. A white-aproned cook or two moves across the cobbled spaces with trays upon their heads; a tradesman's boy comes out of the corner entrance from the hostel; a cat or two stretches himself on the grass; but, for the rest, the court lies in broad sunshine; the shadows slope eastwards, and the fitful splash and trickle of the fountain asserts itself clearly above the gentle rumble of Trinity Street.

Within, the room in which these two sat was much like other rooms of the same standing; only, in this one case the walls were paneled with white-painted deal. Three doors led out of it—two into a tiny bedroom and a tinier dining-room respectively; the third on to the passage leading to the lecture-rooms. Frank found it very convenient, since he thus was enabled, at every hour of the morning when the lectures broke up, to have the best possible excuse for conversing with his friends through the window.

The room was furnished really well. Above the mantelpiece, where rested an array of smoking-materials and a large silver cigarette-box, hung an ancestral-looking portrait, in a dull gilded frame, of an aged man, with a ruff round his neck, purchased for one guinea; there was a sofa and a set of chairs upholstered in a good damask: a black piano by Broadwood; a large oval gate-leg table; a bureau; shelves filled with very indiscriminate literature—law books, novels, Badminton, magazines and ancient school editions of the classics; a mahogany glass-fronted bookcase packed with volumes of esthetic appearance—green-backed poetry books with white labels; old leather tomes, and all the rest of the specimens usual to a man who has once thought himself literary. Then there were engravings, well framed, round the walls; a black iron-work lamp, fitted for electric light, hung from the ceiling; there were a couple of oak chests, curiously carved. On the stained floor lay three or four mellow rugs, and the window-boxes outside blazed with geraniums. The débris of tea rested on the window-seat nearest the outer door.

Frank Guiseley, too, lolling in the window-seat in a white silk shirt, unbuttoned at the throat, and gray flannel trousers, and one white shoe, was very pleasant to look upon. His hair was as black and curly as a Neapolitan's; he had a smiling, humorous mouth, and black eyes—of an extraordinary twinkling alertness....