No Refuge but in Truth 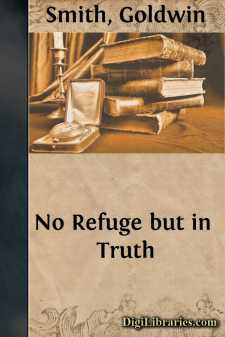 The letters collected in this volume appeared, with others, in the New York Sun, to the Editor of which the thanks of the writer for his courtesy are due.

There appeared to be sufficient interest in the discussion to call for the publication of a small edition.

The age calls for religious truth. Nine thousand persons communicated their cravings to the Editor of the London Daily Telegraph. By their side the present writer places himself, not a teacher, but an inquirer, seeking for truth and open to conviction.

The position of the clergy, especially where tests are stringent, calls for our utmost consideration. But I submit that it would not be improved by any attempt, such as seems to be made in a work of great ability before me, to merge the theological in the social question. Benevolence may still be far below the Gospel mark, and the Christian faith may suffer from its default. But the increase of it and the multiplication of its monuments since the world has been comparatively at peace cannot be denied; while of the distress which still calls for an increase of Christian effort, not the whole is due to default on the part of the wealthier classes. Idleness, vice, intemperance, improvident marriage, play their part. Let us not be led away upon a false issue.

There is nothing for it but truth.

I. MAN, AND HIS DESTINY.

Time has passed since I first sought access to the columns of The Sun, ranging myself with the nine thousand who in an English journal had craved for religious light. The movement which caused that craving has gone on. The Churches show their sense of it. Even in that of Rome there is a growth of "Modernism," as it is called by the Pope, who, having lost his mediaeval preservatives of unity, strives to quell Modernism by denunciation. Anglicanism resorts to a grand pageant of uniformity, beneath which, however, lurk Anglo-Catholicism, Evangelicism, and Liberalism, by no means uniform in faith. The Protestant Churches proper, their spirit being more emotional, feel the doctrinal movement less. But they are not unmoved, as they show by relaxation of tests and inclination to informal if not formal union, as well as by increasing the aesthetic and social attractions of their cult. Wild theosophic sects are born and die. But marked is the increase of scepticism, avowed and unavowed. It advances probably everywhere in the track of physical science. We are confronted with the vital question what the world would be without religion, without trust in Providence, without hope or fear of a hereafter. Social order is threatened. Classes which have hitherto acquiesced in their lot, believing that it was a divine ordinance and that there would be redress and recompense in a future state, are now demanding that conditions shall be levelled here....