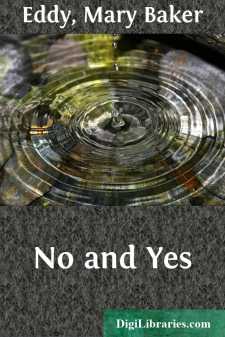 To kindle in all minds a common sentiment of regard for the spiritual idea emanating from the infinite, is a most needful work; but this must be done gradually, for Truth is as "the still, small voice," which comes to our recognition only as our natures are changed by its silent influence.

Small streams are noisy and rush precipitately; and babbling brooks fill the rivers till they rise in floods, demolishing bridges and overwhelming cities. So men, when thrilled by a new idea, are sometimes impatient; and, when public sentiment is aroused, are liable to be borne on by the current of feeling. They should then turn temporarily from the tumult, for the silent cultivation of the true idea and the quiet practice of its virtues. When the noise and stir of contending sentiments cease, and the flames die away on the mount of revelation, we can read more clearly the tablets of Truth.

The theology and medicine of Jesus were one,—in the divine oneness of the trinity, Life, Truth, and Love, which healed the sick and cleansed the sinful. This trinity in unity, correcting the individual thought, is the only Mind-healing I vindicate; and on its standard have emblazoned that crystallized expression, Christian Science.

A spurious and hydra-headed mind-healing is naturally glared at by the pulpit, ostracized by the medical faculty, and scorned by people of common sense. To aver that disease is normal, a God-bestowed and stubborn reality, but that you can heal it, leaves you to work against that which is natural and a law of being. It is scientific to rob disease of all reality; and to accomplish this, you cannot begin by admitting its reality. Our Master taught his students to deny self, sense, and take up the cross. Mental healers who admit that disease is real should be made to test the feasibility of what they say by healing one case audibly, through such an admission,—if this is possible. I have healed more disease by the spoken than the unspoken word.

The honest student of Christian Science is modest in his claims and conscientious in duty, waiting and working to mature what he has been taught. Institutes furnished with such teachers are becoming beacon-lights along the shores of erudition; and many who are not teachers have large practices and some marked success in healing the most defiant forms of disease.

Dishonesty destroys one's ability to heal mentally. Conceit cannot avert the effects of deceit. Taking advantage of the present ignorance in relation to Christian Science Mind-healing, many are flooding our land with conflicting theories and practice. We should not spread abroad patchwork ideas that in some vital points lack Science. How sad it is that envy will bend its bow and shoot its arrow at the idea which claims only its inheritance, is naturally modest, generous, and sincere! while the trespassing error murders either friend or foe who stands in its way. Truly it is better to fall into the hands of God, than of man.

When I revised "Science and Health with Key to the Scriptures," in 1878, some irresponsible people insisted that my manual of the practice of Christian Science Mind-healing should not be made public; but I obeyed a diviner rule. People dependent on the rules of this practice for their healing, not having lost the Spirit which sustains the genuine practice, will put that book in the hands of their patients, whom it will heal, and recommend it to their students, whom it would enlighten. Every teacher must pore over it in secret, to keep himself well informed. The Nemesis of the history of Mind-healing notes this hour.

Dishonesty necessarily stultifies the spiritual sense which Mind-healers specially need; and which they must possess, in order to be safe members of the community. How good and pleasant a thing it is to seek not so much thine own as another's good, to sow by the wayside for the way-weary, and trust Love's recompense of love.

Plagiarism from my writings is so common it is becoming odious to honest people; and such compilations, instead of possessing the essentials of Christian Science, are tempting and misleading.

Reading Science and Health has restored the sick to health; but the task of learning thoroughly the Science of Mind-healing and demonstrating it understandingly had better be undertaken in health than sickness.