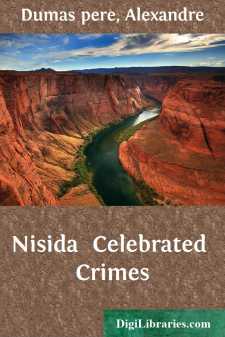 If our readers, tempted by the Italian proverb about seeing Naples and then dying, were to ask us what is the most favourable moment for visiting the enchanted city, we should advise them to land at the mole, or at Mergellina, on a fine summer day and at the hour when some solemn procession is moving out of the cathedral. Nothing can give an idea of the profound and simple-hearted emotion of this populace, which has enough poetry in its soul to believe in its own happiness. The whole town adorns herself and attires herself like a bride for her wedding; the dark facades of marble and granite disappear beneath hangings of silk and festoons of flowers; the wealthy display their dazzling luxury, the poor drape themselves proudly in their rags. Everything is light, harmony, and perfume; the sound is like the hum of an immense hive, interrupted by a thousandfold outcry of joy impossible to describe. The bells repeat their sonorous sequences in every key; the arcades echo afar with the triumphal marches of military bands; the sellers of sherbet and water-melons sing out their deafening flourish from throats of copper. People form into groups; they meet, question, gesticulate; there are gleaming looks, eloquent gestures, picturesque attitudes; there is a general animation, an unknown charm, an indefinable intoxication. Earth is very near to heaven, and it is easy to understand that, if God were to banish death from this delightful spot, the Neapolitans would desire no other paradise.

The story that we are about to tell opens with one of these magical pictures. It was the Day of the Assumption in the year 1825; the sun had been up some four or five hours, and the long Via da Forcella, lighted from end to end by its slanting rays, cut the town in two, like a ribbon of watered silk. The lava pavement, carefully cleaned, shone like any mosaic, and the royal troops, with their proudly waving plumes, made a double living hedge on each side of the street. The balconies, windows, and terraces, the stands with their unsubstantial balustrades, and the wooden galleries set up during the night, were loaded with spectators, and looked not unlike the boxes of a theatre. An immense crowd, forming a medley of the brightest colours, invaded the reserved space and broke through the military barriers, here and there, like an overflowing torrent. These intrepid sightseers, nailed to their places, would have waited half their lives without giving the least sign of impatience.

At last, about noon, a cannon-shot was heard, and a cry of general satisfaction followed it. It was the signal that the procession had crossed the threshold of the church. In the same moment a charge of carabineers swept off the people who were obstructing the middle of the street, the regiments of the line opened floodgates for the overflowing crowd, and soon nothing remained on the causeway but some scared dog, shouted at by the people, hunted off by the soldiers, and fleeing at full speed. The procession came out through the Via di Vescovato. First came the guilds of merchants and craftsmen, the hatters, weavers, bakers, butchers, cutlers, and goldsmiths. They wore the prescribed dress: black coats, knee breeches, low shoes and silver buckles. As the countenances of these gentlemen offered nothing very interesting to the multitude, whisperings arose, little by little, among the spectators, then some bold spirits ventured a jest or two upon the fattest or the baldest of the townsmen, and at last the boldest of the lazzaroni slipped between the soldiers' legs to collect the wax that was running down from the lighted tapers.

After the craftsmen, the religious orders marched past, from the Dominicans to the Carthusians, from the Carmelites to the Capuchins. They advanced slowly, their eyes cast down, their step austere, their hands on their hearts; some faces were rubicund and shining, with large cheek-hones and rounded chins, herculean heads upon bullnecks; some, thin and livid, with cheeks hollowed by suffering and penitence, and with the look of living ghosts; in short, here were the two sides of monastic life.

At this moment, Nunziata and Gelsomina, two charming damsels, taking advantage of an old corporal's politeness, pushed forward their pretty heads into the first rank. The break in the line was conspicuous; but the sly warrior seemed just a little lax in the matter of discipline.