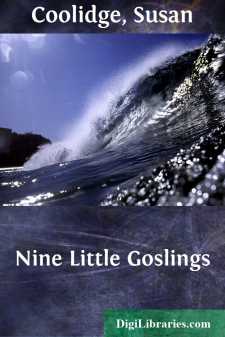 When nursery lamps are veiled, and nurse is singingIn accents low,Timing her music to the cradle's swinging,Now fast, now slow,—Singing of Baby Bunting, soft and furryIn rabbit cloak,Or rock-a-byed amid the toss and flurryOf wind-swept oak;Of Boy-Blue sleeping with his horn beside him,Of my son John,Who went to bed (let all good boys deride him)With stockings on;Of sweet Bo-Peep following her lambkins straying;Of Dames in shoes;Of cows, considerate, 'mid the Piper's playing,Which tune to choose;Of Gotham's wise men bowling o'er the billow,Or him, less wise,Who chose rough bramble-bushes for a pillow,And scratched his eyes,—It may be, while she sings, that through the portalSoft footsteps glide,And, all invisible to grown-up mortal,At cradle sideSits Mother Goose herself, the dear old mother,And rocks and croons,In tones which Baby hearkens, but no other,Her old-new tunes!I think it must be so, else why, years after,Do we retraceAnd mix with shadowy, recollected laughterThoughts of that face;Seen, yet unseen, beaming across the ages,Brimful of funAnd wit and wisdom, baffling all the sagesUnder the sun?A grown-up child has place still, which no otherMay dare refuse;I, grown up, bring this offering to our Mother,To Mother Goose;And, standing with the babies at that olden,Immortal knee,I seem to feel her smile, benign and golden,Falling on me.   CONTENTS. CHAP   PAGE I. Curly Locks II. Goosey, Goosey Gander III. Little Bo-Peep IV. Mistress Mary V. Lady Bird VI. One, Two, Buckle My Shoe VII. Ride a Cock-Horse VIII. Lady Queen Anne IX. Up, Up, Up, and Down, Down, Down-y     CURLY LOCKS.

WHEN a little girl is six and a little boy is six, they like pretty much the same things and enjoy pretty much the same games. She wears an apron, and he a jacket and trousers, but they are both equally fond of running races, spinning tops, flying kites, going down hill on sleds, and making a noise in the open air. But when the little girl gets to be eleven or twelve, and to grow thin and long, so that every two months a tuck has to be let down in her frocks, then a great difference becomes visible. The boy goes on racing and whooping and comporting himself generally like a young colt in a pasture; but she turns quiet and shy, cares no longer for rough play or exercise, takes droll little sentimental fancies into her head, and likes best the books which make her cry. Almost all girls have a fit of this kind some time or other in the course of their lives; and it is rather a good thing to have it early, for little folks get over such attacks more easily than big ones. Perhaps we may live to see the day when wise mammas, going through the list of nursery diseases which their children have had, will wind up triumphantly with, "Mumps, measles, chicken-pox,—and they are all over with 'Amy Herbert,' 'The Heir of Redclyffe,' and the notion that they are going to be miserable for the rest of their lives!"

Sometimes this odd change comes after an illness when a little girl feels weak and out of sorts, and does not know exactly what is the matter....