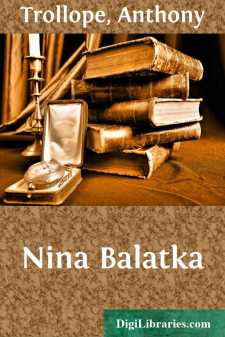 Anthony Trollope was an established novelist of great renown when Nina Balatka was published in 1866, twenty years after his first novel. Except for La Vendée, his third novel, set in France during the Revolution, all his previous works were set in England or Ireland and dealt with the upper levels of society: the nobility and the landed gentry (wealthy or impoverished), and a few well-to-do merchants — people several strata above the social levels of the characters popularized by his contemporary Dickens. Most of Trollope's early novels were set in the countryside or in provincial towns, with occasional forays into London. The first of his political novels, Can You Forgive Her, dealing with the Pallisers was published in 1864, two years before Nina. By the time he began writing Nina, shortly after a tour of Europe, Trollope was a master at chronicling the habits, foibles, customs, and ways of life of his chosen subjects.

Nina Balatka is, on the surface, a love story — not an unusual theme for Trollope. Romance and courtship were woven throughout all his previous works, often with two, three, or even more pairs of lovers per novel. Most of his heroes and heroines, after facing numerous hurdles, often of their own making, were eventually happily united by the next-to-last chapter. A few were doomed to disappointment (Johnny Eames never won the heart of Lily Dale through two of the "Barsetshire" novels), but marital bliss — or at least the prospect of bliss — was the usual outcome. Even so, the reader of Trollope soon notices his analytical description of Victorian courtship and marriage. In the circles of Trollope's characters, only the wealthy could afford to marry for love; those without wealth had to marry for money, sometimes with disastrous consequences. By the time of Nina, Trollope's best exploration of this subject was the marriage between Plantagenet Palliser and Lady Glencora M'Cluskie, the former a cold fish and the latter a hot-blooded heiress in love with a penniless scoundrel (Can You Forgive Her? 1865). Yet to come was the disastrous marriage of intelligent Lady Laura Standish to the wealthy but old-maidish Robert Kennedy in Phineas Finn and its sequel.

But Nina Balatka is different from Trollope's previous novels in four respects. First, Trollope was accustomed to include in his novels his own witty editorial comments about various subjects, often paragraphs or even several pages long. No such comments are found in Nina. Second, the story is set in Prague instead of the British isles. Third, the hero and heroine are already in love and engaged to one another at the opening; we are not told any details about their falling in love. The hero, Anton Trendellsohn is a successful businessman in his mid-thirties — not the typical Trollopian hero in his early twenties, still finding himself, and besotted with love. Anton is rather cold as lovers go, seldom whispering words of endearment to Nina. But it is the fourth difference which really sets this novel apart and makes it both a masterpiece and an enigma....