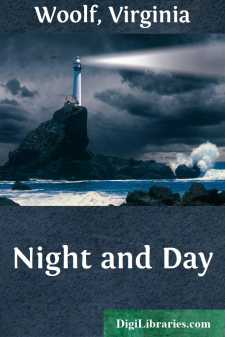 It was a Sunday evening in October, and in common with many other young ladies of her class, Katharine Hilbery was pouring out tea. Perhaps a fifth part of her mind was thus occupied, and the remaining parts leapt over the little barrier of day which interposed between Monday morning and this rather subdued moment, and played with the things one does voluntarily and normally in the daylight. But although she was silent, she was evidently mistress of a situation which was familiar enough to her, and inclined to let it take its way for the six hundredth time, perhaps, without bringing into play any of her unoccupied faculties. A single glance was enough to show that Mrs. Hilbery was so rich in the gifts which make tea-parties of elderly distinguished people successful, that she scarcely needed any help from her daughter, provided that the tiresome business of teacups and bread and butter was discharged for her.

Considering that the little party had been seated round the tea-table for less than twenty minutes, the animation observable on their faces, and the amount of sound they were producing collectively, were very creditable to the hostess. It suddenly came into Katharine's mind that if some one opened the door at this moment he would think that they were enjoying themselves; he would think, "What an extremely nice house to come into!" and instinctively she laughed, and said something to increase the noise, for the credit of the house presumably, since she herself had not been feeling exhilarated. At the very same moment, rather to her amusement, the door was flung open, and a young man entered the room. Katharine, as she shook hands with him, asked him, in her own mind, "Now, do you think we're enjoying ourselves enormously?"... "Mr. Denham, mother," she said aloud, for she saw that her mother had forgotten his name.

That fact was perceptible to Mr. Denham also, and increased the awkwardness which inevitably attends the entrance of a stranger into a room full of people much at their ease, and all launched upon sentences. At the same time, it seemed to Mr. Denham as if a thousand softly padded doors had closed between him and the street outside. A fine mist, the etherealized essence of the fog, hung visibly in the wide and rather empty space of the drawing-room, all silver where the candles were grouped on the tea-table, and ruddy again in the firelight. With the omnibuses and cabs still running in his head, and his body still tingling with his quick walk along the streets and in and out of traffic and foot-passengers, this drawing-room seemed very remote and still; and the faces of the elderly people were mellowed, at some distance from each other, and had a bloom on them owing to the fact that the air in the drawing-room was thickened by blue grains of mist. Mr. Denham had come in as Mr. Fortescue, the eminent novelist, reached the middle of a very long sentence. He kept this suspended while the newcomer sat down, and Mrs. Hilbery deftly joined the severed parts by leaning towards him and remarking:

"Now, what would you do if you were married to an engineer, and had to live in Manchester, Mr....