New Treasure Seekers or, The Bastable Children in Search of a Fortune 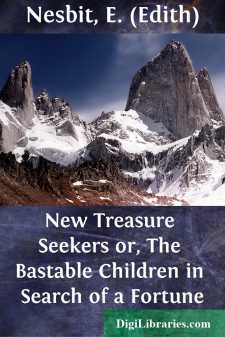 THE ROAD TO ROME; OR, THESILLY STOWAWAY We Bastables have only two uncles, and neither of them, are our own natural-born relatives. One is a great-uncle, and the other is the uncle from his birth of Albert, who used to live next door to us in the Lewisham Road. When we first got to know him (it was over some baked potatoes, and is quite another story) we called him Albert-next-door's-Uncle, and then Albert's uncle for short. But Albert's uncle and my father joined in taking a jolly house in the country, called the Moat House, and we stayed there for our summer holidays; and it was there, through an accident to a pilgrim with peas in his shoes—that's another story too—that we found Albert's uncle's long-lost love; and as she was very old indeed—twenty-six next birthday—and he was ever so much older in the vale of years, he had to get married almost directly, and it was fixed for about Christmas-time. And when our holidays came the whole six of us went down to the Moat House with Father and Albert's uncle. We never had a Christmas in the country before. It was simply ripping. And the long-lost love—her name was Miss Ashleigh, but we were allowed to call her Aunt Margaret even before the wedding made it really legal for us to do so—she and her jolly clergyman brother used to come over, and sometimes we went to the Cedars, where they live, and we had games and charades, and hide-and-seek, and Devil in the Dark, which is a game girls pretend to like, and very few do really, and crackers and a Christmas-tree for the village children, and everything you can jolly well think of.

And all the time, whenever we went to the Cedars, there was all sorts of silly fuss going on about the beastly wedding; boxes coming from London with hats and jackets in, and wedding presents—all glassy and silvery, or else brooches and chains—and clothes sent down from London to choose from. I can't think how a lady can want so many petticoats and boots and things just because she's going to be married. No man would think of getting twenty-four shirts and twenty-four waistcoats, and so on, just to be married in.

"It's because they're going to Rome, I think," Alice said, when we talked it over before the fire in the kitchen the day Mrs. Pettigrew went to see her aunt, and we were allowed to make toffee. "You see, in Rome you can only buy Roman clothes, and I think they're all stupid bright colours—at least I know the sashes are. You stir now, Oswald. My face is all burnt black."

Oswald took the spoon, though it was really not his turn by three; but he is one whose nature is so that he cannot make a fuss about little things—and he knows he can make toffee.

"It's the dream of my life to go to Rome," Noël said. Noël is our poet brother. "Just think of what the man says in the 'Roman Road.' I wish they'd take me."