New observations on the natural history of bees 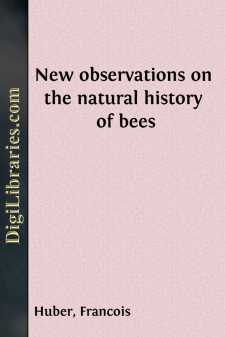 ON THE IMPREGNATION OF THE QUEEN BEE.

When I had the honour at Genthod of giving you an account of my principal experiments on bees, you desired me to transmit a written detail, that you might consider them with greater attention. I hasten, therefore, to extract the following observations from my journal.—As nothing can be more flattering to me than the interest you take in my researches, permit me to   remind you of your promise to suggest new experiments.

After having long studied bees in glass hives constructed on M. de Reaumur's principle, you have found the form unfavourable to an observer. The hives being too wide, two parallel combs were made by the bees, consequently whatever passed between them escaped observation. From this inconvenience, which I have experienced, you recommended much thinner hives to naturalists, where the panes should be so near each other, that only a single row of combs could be erected between them. I have followed your admonitions, Sir, and provided hives only eighteen lines in width, in which I have found no difficulty to establish swarms. However, bees must not be entrusted with the charge of constructing a single comb: Nature has taught them to make parallel ones, which   is a law they never derogate from, unless when constrained by some particular arrangement. Therefore, if left to themselves in these thin hives, as they cannot form two combs parallel to the plane of the hive, they will form several small ones perpendicular to it, and, in that case, all is equally lost to the observer. Thus it became essential previously to arrange the position of the combs. I forced the bees to build them perpendicular to the horizon, and so that the lateral surfaces were three or four lines from the panes of the hive. This distance allows the bees sufficient liberty, but prevents them from collecting in too large clusters on the surface of the comb. By such precautions, bees are easily established in very thin hives. There they pursue their labours with the same assiduity and regularity; and, every cell being exposed, none of their motions can be concealed.

It is true, that by compelling these insects to a habitation where they could construct   only a single row of combs, I had, in a certain measure, changed their natural situation, and this circumstance might possibly have affected their instinct. Therefore, to obviate every objection, I invented a kind of hives, which, without losing the advantages of those very thin, at the same time approached the figure of common hives where bees form several rows of combs.

I took several small fir boxes, a foot square and fifteen lines wide, and joined them together by hinges, so that they could be opened and shut like the leaves of a book. When using a hive of this description,   we took care to fix a comb in each frame, and then introduced all the   bees necessary for each particular experiment. By opening the different divisions successively, we daily inspected both surfaces of every comb. There was not a single cell where we could not distinctly see what passed at all times, nor a single bee, I may almost say, with which we were not particularly acquainted....