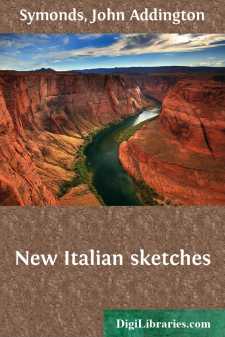 Italiam petimus! We left our upland home before daybreak on a clear October morning. There had been a hard frost, spangling the meadows with rime-crystals, which twinkled where the sun's rays touched them. Men and women were mowing the frozen grass with thin short Alpine scythes; and as the swathes fell, they gave a crisp, an almost tinkling sound. Down into the gorge, surnamed of Avalanche, our horses plunged; and there we lost the sunshine till we reached the Bear's Walk, opening upon the vales of Albula, and Julier, and Schyn. But up above, shone morning light upon fresh snow, and steep torrent-cloven slopes reddening with a hundred fading plants; now and then it caught the grey-green icicles that hung from cliffs where summer streams had dripped. There is no colour lovelier than the blue of an autumn sky in the high Alps, defining ridges powdered with light snow, and melting imperceptibly downward into the warm yellow of the larches and the crimson of the bilberry. Wiesen was radiantly beautiful: those aërial ranges of the hills that separate Albula from Julier soared crystal-clear above their forests; and for a foreground, on the green fields starred with lilac crocuses, careered a group of children on their sledges. Then came the row of giant peaks—Pitz d'Aela, Tinzenhorn, and Michelhorn, above the deep ravine of Albula—all seen across wide undulating golden swards, close-shaven and awaiting winter. Carnations hung from cottage windows in full bloom, casting sharp angular black shadows on white walls.

Italiam petimus! We have climbed the valley of the Julier, following its green, transparent torrent. A night has come and gone at Mühlen. The stream still leads us up, diminishing in volume as we rise, up through the fleecy mists that roll asunder for the sun, disclosing far-off snowy ridges and blocks of granite mountains. The lifeless, soundless waste of rock, where only thin winds whistle out of silence and fade suddenly into still air, is passed. Then comes the descent, with its forests of larch and cembra, golden and dark green upon a ground of grey, and in front the serried shafts of the Bernina, and here and there a glimpse of emerald lake at turnings of the road. Autumn is the season for this landscape. Through the fading of innumerable leaflets, the yellowing of larches, and something vaporous in the low sun, it gains a colour not unlike that of the lands we seek. By the side of the lake at Silvaplana the light was strong and warm, but mellow. Pearly clouds hung over the Maloja, and floating overhead cast shadows on the opaque water, which may literally be compared to chrysoprase. The breadth of golden, brown, and russet tints upon the valley at this moment adds softness to its lines of level strength. Devotees of the Engadine contend that it possesses an austere charm beyond the common beauty of Swiss landscape; but this charm is only perfected in autumn. The fresh snow on the heights that guard it helps. And then there are the forests of dark pines upon those many knolls and undulating mountain-flanks beside the lakes....