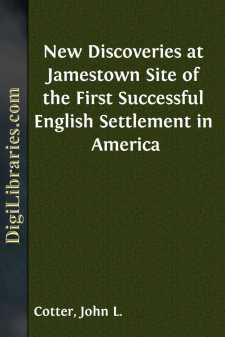 Part One Exploration: The Ground Yields Many Things By John L. Cotter Supervising Archeologist, Colonial National Historical Park “As in the arts and sciences the first invention is of more consequence than all the improvements afterward, so in kingdoms, the first foundation, or plantation, is of more noble dignity and merit than all that followeth.” —Lord Bacon

In the summer of 1934 a group of archeologists set to work to explore the site of the first permanent English settlement at Jamestown Island, Va. For the next 22 years the National Park Service strove—with time out for wars and intervals between financial allotments—to wrest from the soil of Jamestown the physical evidence of 17th-century life. The job is not yet complete. Only 24 out of 60 acres estimated to comprise “James Citty” have been explored; yet a significant amount of information has been revealed by trowel and whiskbroom and careful recording.

By 1956 a total of 140 structures—brick houses, frame houses with brick footings, outbuildings, workshops, wells, kilns, and even an ice storage pit—had been recorded. To help unravel the mystery of landholdings (sometimes marked by ditches), 96 ditches of all kinds were located, and hundreds of miscellaneous features from post holes to brick walls were uncovered. Refuse pits were explored meticulously, since before the dawn of history man has left his story in the objects he discarded.

When archeology at Jamestown is mentioned, the question is often asked, why was it necessary to treat so famous a historic site as an archeological problem at all? Isn’t the story finished with the accounts of John Smith’s adventures, the romance of John Rolfe and Pocahontas, the “starving time,” the Indian massacre of 1622, Nathaniel Bacon’s rebellion against Governor Berkeley, and the establishment of the first legislative assembly?

The archeologist’s answer is that the real drama of daily life of the settlers—the life they knew 24 hours a day—is locked in the unwritten history beneath humus and tangled vegetation of the island. Here a brass thimble from the ruins of a cottage still retains a pellet of paper to keep it on a tiny finger that wore it 300 years ago. A bent halberd in an abandoned well, a discarded sword, and a piece of armor tell again the passing of terror of the unknown, after the Indians retreated forever into the distant hills and forests. Rust-eaten axes, wedges, mattocks, and saws recall the struggle to clear a wilderness. The simple essentials of life in the first desperate years have largely vanished with traces of the first fort and its frame buildings. But in later houses the evidence of Venetian glass, Dutch and English delftware, pewter, and silver eating utensils, and other comforts and little luxuries tell of new-found security and the beginning of wealth. In all, a half-million individual artifacts at the Jamestown museum represent the largest collection from any 17th-century colonial site in North America....