New and Original Theories of the Great Physical Forces 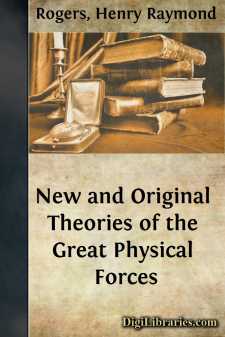 CHAPTER I. INTRODUCTORY. The Sun.

The sun's position in the great field of energy is daily becoming more exalted in the estimation of philosophic minds. His labors are being revealed to us with a distinctness never before conceived. He it is that stored the coal in the bosom of the earth, and piled up the polar ice. He it is that aids the chemist, drives the engine, ripens the harvest, dispenses life and health.

The study of the sun and solar physics, therefore, must be essential to the right understanding of whatever we observe to take place at the earth. Sun and earth are united in indissoluble bonds. In philosophic minds the conviction of a most perfect inter-dependence is rapidly gaining ground.

All this has been known and appreciated to a degree, yet this great source of universal operations is shrouded in mystery. Still, our curiosity has been kindled, and men are eagerly looking for further developments.

Natural Science, in all her branches, is fully awake, and is on her watch-tower of observation. Ignorance of the sun, of its character, and of the methods by which its functions are performed, must be confessed; notwithstanding all the more recent unfoldings and imaginings of scientists, regarding the great orb. But yet we are very hopeful of vast increase in our solar knowledge; not alone, or chiefly, by new observations, or discoveries, but quite as much by new interpretations of old, long observed phenomena. The ground of hopefulness lies in the belief that a grand unity underlies, and binds together in one, all Physical Forces, as well in earth and sun.

While regarding the sun as all, and more than all that has ever been claimed for it, still we are impressed most strongly that the sun has social relations with his planets, which have never been duly considered by the masters in science. The sun acts, but it must also be that the earth and planets react. The sun gives and dispenses favors, but science has too much overlooked the great fact that the sun receives and sympathizes.

Let our philosophy but accept the idea that the sun rouses the earth into action through their mutual relationships; that the two interchange good offices and essential services, rather than that the sun is wholly independent, and simply gives outright, as philosophy has hitherto conceived, and we think that the dawn of a better day has come.

The new philosophy, in our opinion, will teach that the sun gives in such a way that he will not be impoverished; that though bountiful, he is not wasteful; that though he freely gives, yet that he also as freely receives in return.

CHAPTER II. WHAT IS PROPOSED.

In the following pages I shall endeavor to set forth, in a simple and orderly manner, certain of my own theories of the Great Physical Forces.

In these theories will be comprised the identity of those forces, the intimate and essential nature of sunlight, sun-heat, gravity, sun-spots, winds and sounds, also the intimate nature of the atmosphere.

In treating these subjects my opinions will not be found in accord with those which receive universal assent at the present time, and I may thus unintentionally offend. I shall therefore claim exceeding indulgence.

If I differ from high authority, I have not a thought of detraction. None can venerate the Nestors in science who have enriched its annals, more than I, and though we reverse their judgments, their errors are confessedly our indispensable helps and guides.

The problem of the great physical forces has engaged the profoundest attention of mankind from the earliest historic period down to the present time, yet it remains practically unsolved....