Negro Folk Rhymes Wise and Otherwise: With a Study 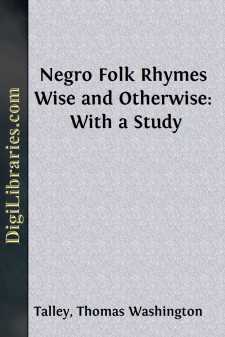 Of the making of books by individual authors there is no end; but a cultivated literary taste among the exceptional few has rendered almost impossible the production of genuine folk-songs. The spectacle, therefore, of a homogeneous throng of partly civilized people dancing to the music of crude instruments and evolving out of dance-rhythm a lyrical or narrative utterance in poetic form is sufficiently rare in the nineteenth century to challenge immediate attention. In Negro Folk Rhymes is to be found no inconsiderable part of the musical and poetic life-records of a people; the compiler presents an arresting volume which, in addition to being a pioneer and practically unique in its field, is as nearly exhaustive as a sympathetic understanding of the Negro mind, careful research, and labor of love can make it. Professor Talley of Fisk University has spared himself no pains in collecting and piecing together every attainable scrap and fragment of secular rhyme which might help in adequately interpreting the inner life of his own people.

Being the expression of a race in, or just emerging from bondage, these songs may at first seem to some readers trivial and almost wholly devoid of literary merit. In phraseology they may appear crude, lacking in that elegance and finish ordinarily associated with poetic excellence; in imagery they are at times exceedingly winter-starved, mediocre, common, drab, scarcely ever rising above the unhappy environment of the singers. The outlook upon life and nature is, for the most part, one of imaginative simplicity and child-like naïveté; superstitions crowd in upon a worldly wisdom that is elementary, practical, and obvious; and a warped and crooked human nature, developed and fostered by circumstances, shows frequently through the lines. What else might be expected? At the time when these rhymes were in process of being created the conditions under which the American Negro lived and labored were not calculated to inspire him with a desire for the highest artistic expression. Restricted, cramped, bound in unwilling servitude, he looked about him in his miserable little world to see whatever of the beautiful or happy he might find; that which he discovered is pathetically slight, but, such as it is, it served to keep alive his stunted artist-soul under the most adverse circumstances. He saw the sweet pinks under a blue sky, or observed the fading violets and the roses that fall, as he passed to a tryst under the oak trees of a forest, and wrought these things into his songs of love and tenderness. Friendless and otherwise without companionship he lived in imagination with the beasts and birds of the great out-of-doors; he knew personally Mr. Coon, Brother Rabbit, Mr. 'Possum and their associates of the wild; Judge Buzzard and Sister Turkey appealed to his fancy as offering material for what he supposed to be poetic treatment. Wherever he might find anything in his lowly position which seemed to him truly useful or beautiful, he seized upon it and wove about it the sweetest song he could sing....