Ned Garth Made Prisoner in Africa. A Tale of the Slave Trade 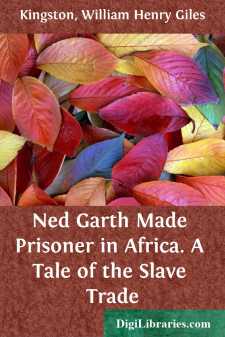 “Can you make her out, Ned? My eyes are not so sharp as they used to be, and I lost sight of the craft when came on.”

“She has tacked, uncle; I see her masts in one, and she’s standing to the westward.”

“I was afraid so; she must be a stranger, or she would have kept her course. She’ll not weather the head as she’s now standing, and if it doesn’t clear and show her the land, she’ll be on shore, as sure as my name is John Pack.”

The speaker was a strongly built man, dressed in a thick pea-coat buttoned closely over his breast, the collar turned up to protect his neck. A white, low-crowned, weather-beaten, broadish-brimmed hat covered his head, and he held in his hand a thick stick, which he pressed firmly on the ground as he walked, for he had been deprived of one of his legs, its place being supplied by a wooden substitute resembling a mop handle in shape. His appearance was decidedly nautical, and though habited in plain clothes, he might have been known at a glance to be a naval officer.

His companion, a boy of about fourteen years of age, though from his height and breadth of shoulders he might have been supposed to be older, wore a thick monkey jacket, a necessary protection against the strong wind and dense masses of rain and mist which swept up from the ocean.

They stood on the top of a cliff on the southern coast of England, which, circling round from the north-west to the south-east, formed a broad deep bay, terminated on the further side by a bluff headland, and on the other by a rocky point, a ledge partly under water extending beyond it.

The bay was indeed a dangerous place to enter with so heavy a gale from the south-west as was now blowing.

Lieutenant Pack and his young nephew Edward Garth were returning home from an errand of mercy to an old fisherman who had been severely injured by the upsetting of his boat, in a vain endeavour to go off to a coaster in distress, which foundered in sight of land, when he was washed on shore amid the fragments of his boat, narrowly escaping with his life. Although the fisherman’s cottage was upwards of two miles off, the old lieutenant trudged daily over to see him, and on this occasion had been accompanied by his nephew, carrying a basket containing certain delicacies prepared by the kind hands of Miss Sarah Pack, or sister Sally, as he was wont to call her. He and his nephew had started later than usual, and the gloom of an autumn evening had overtaken them when they were still some distance from home. He had caught sight of the vessel, apparently a large brig, and had at once perceived her dangerous position.

For some time he and his nephew stood watching the stranger from the cliff.

“She made out the land sooner than I expected she would,” observed the lieutenant; “but she’ll scarcely weather the point even now, unless the wind shifts. She can’t do it—she can’t do it!” he cried, striking the ground in his eagerness with his stick. “Run on, Ned, to the coast-guard station. If you meet one of the men, tell him, in case he hasn’t seen her, that I think the vessel will be on shore before long....