Ned, Bob and Jerry on the Firing Line The Motor Boys Fighting for Uncle Sam 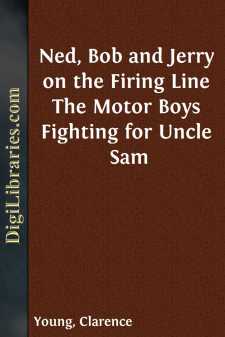 CHAPTER I THE SPY ALARM

“There’s a German on the ground! Get him!”

The sun glistened on scores of polished bayonets, as sturdy figures, clad in olive drab, which matched in hue the brown of the earth, sprang from their trenches and rushed forward.

“Put some pep into it! Lively now! Get the Germans!”

There were dull thuds, and there was a ripping, tearing sound as the steel slashed its way through the tough cloth. Along the swaying line rushed the young soldiers, stabbing to right and left as they went.

Now their weapons were directed downward with deadly force, and they sank them into the forms on the ground with such energy that the earth beneath was torn and gashed, and the muzzles of the guns, to which the stabbing bayonets were attached, made deep impressions on the yielding forms.

“There’s a German on the ground! Get him!”

Again the cry rang out, and again the rushing, charging line surged forward, and then there followed once more the thuds which told of the cold steel going through and through and––

Then from the center of one of the charging lines there came a laugh as a lad, having driven his keen weapon home with too much force, being unable to free it, raised on his gun a large sack stuffed with hay, the fodder bristling out of one of the gashes he had made.

“That’s the stuff, Chunky! Go to it!” yelled his laughing comrades. “If you can’t get a German any other way, stick him on the end of your bayonet, bring him back to camp, and feed him to death!”

“Silence in the ranks!” cried the sergeant who was drilling the young soldiers of Camp Dixton in bayonet practice. For this is what it was, and not a charge on some Hun position; though from the fervor with which the boys went at it, and the fierce commands of their officers, a person hearing, and not seeing, might be inclined to believe that it was actual warfare.

And it was, as nearly as it could be approximated, for the sacks stuffed with hay or other yielding material, suspended on framework as is a football dummy or scattered over the ground, were called “Germans,” by the drilling officers.

And, at the command: “There’s a German on the ground! Get him!” it was the part of the prospective soldier to rush at the recumbent sack and stab it through and through with all his might, trying to put into the stroke all the force he would put into a similar one when he should attack the enemy.

“You got your man all right, Chunky!” observed a tall, bronzed lad, standing next to the stout youth who had used his bayonet with such force that he carried off one of the sacks as a trophy. “You must be feeling pretty strong today.”

“Oh, let up, can’t you, Jerry?” begged the badgered one. “The ground was soft under that sack, and I didn’t think the steel would go through so far.”

“Well, do that when you get on the firing line in France and it will be all right,” commented another lad, on the opposite side of the one addressed as Chunky. “I wonder how much longer we’re going to keep this up?”

“As you were!” came the sudden order, fairly barked out from an instructing sergeant, and the boys in the particular squad which included Ned, Bob and Jerry, of whom more later, resumed the positions they had been in before the order to charge bayonets had been given....