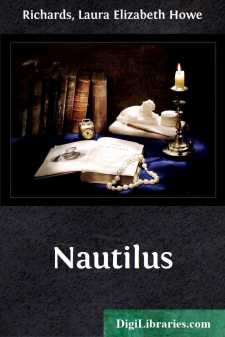 The boy John was sitting on the wharf, watching the ebb of the tide. The current was swift, for there had been heavy rains within a few days; the river was full of drifting logs, bits of bark, odds and ends of various kinds; the water, usually so blue, looked brown and thick. It swirled round the great mossy piers, making eddies between them; from time to time the boy dropped bits of paper into these eddies, and saw with delight how they spun round and round, like living things, and finally gave up the struggle and were borne away down stream.

"Only, in the real maelstrom," he said, "they don't be carried away; they go over the edge, down into the black hole, whole ships and ships, and you never see them again. I wonder where they stop, or whether it goes through to the other side of the world."

A great log came drifting along, and struck against a pier; the end swung round, and it rested for a few moments, beating against the wooden wall. This, it was evident, was a wrecked vessel, and it behooved the boy John, as a hero and a life-saver, to rescue her passengers. Seizing a pole, he lay down on his stomach and carefully drew the log toward him, murmuring words of cheer the while.

"They are almost starved to death!" he said, pitifully. "The captain is tied to the mast, and they have not had anything to eat but boots and a puppy for three weeks. The mate and some of the sailors took all the boats and ran away,—at least, not ran, but went off and left the rest of 'em; and they have all said their prayers, for they are very good folks, and the captain didn't want to kill the puppy one bit, but he had to, or else they would all be dead now. And—and the reckoning was dead,—I wonder what that means, and why it is dead so often,—and so they couldn't tell where they were, but they knew that there were cannibals on almost all the islands, and this was the hungriest time of the year for cannibals."

Here followed a few breathless moments, during which the captain, his wife and child, and the faithful members of the crew, were pulled up to the wharf by the unaided arm of the boy John. He wrapped them in hot blankets and gave them brandy and peanut taffy: the first because it was what they always did in books; the second because it was the best thing in the world, and would take away the nasty taste of the brandy.

Leaving them in safety, and in floods of grateful tears, the rescuer bent over the side of the wharf once more, intent on saving the gallant ship from her fate; but at this moment came a strong swirl of tide, the log swung round once more and floated off, and the rescuer fell "all along" into the water. This was nothing unusual, and he came puffing and panting up the slippery logs, and sat down again, shaking himself like a Newfoundland puppy. He wished the shipwrecked crew had not seen him; he knew he should get a whipping when he reached home, but that was of less consequence. Anyhow, she was an old vessel, and now the captain would get a new ship—a fine one, full rigged, with new sails as white as snow; and on his next voyage he would take him, the boy John, in place of the faithless mate, and they would sail away, away, down the river and far across the ocean, and then,—then he would hear the sound of the sea....