Natural History of the Mammalia of India and Ceylon 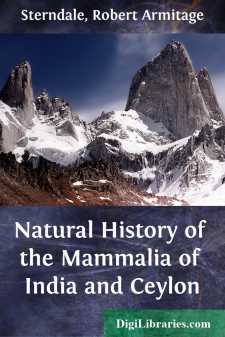 In laying before the public the following history of the Indian Mammalia, I am actuated by the feeling that a popular work on the subject is needed, and would be appreciated by many who do not care to purchase the expensive books that exist, and who also may be more bothered than enlightened by over-much technical phraseology and those learned anatomical dissertations which are necessary to the scientific zoologist.

Another motive in thus venturing is, that the only complete history of Indian Mammalia is Dr. Jerdon's, which is exhaustive within the boundaries he has assigned to India proper; but as he has excluded Assam, Cachar, Tenasserim, Burmah, Arracan, and Ceylon, his book is incomplete as a Natural History of the Mammals of British India. I shall have to acknowledge much to Jerdon in the following pages, and it is to him I owe much encouragement, whilst we were together in the field during the Indian Mutiny, in the pursuit of the study to which he devoted his life; and the general arrangement of this work will be based on his book, his numbers being preserved, in order that those who possess his 'Mammals of India' may readily refer to the noted species.

But I must also plead indebtedness to many other naturalists who have left their records in the 'Journals of the Asiatic Society' and other publications, or who have brought out books of their own, such as Blyth, Elliott, Hodgson, Sherwill, Sykes, Tickell, Hutton, Kellaart, Emerson Tennent, and others; Col. McMaster's 'Notes on Jerdon,' Dr. Anderson's 'Anatomical and Zoological Researches,' Horsfield's 'Catalogue of the Mammalia in the Museum of the East India Company,' Dr. Dobson's 'Monograph of the Asiatic Chiroptera,' the writings of Professors Martin Duncan, Flowers, Kitchen Parker, Boyd Dawkins, Garrod, Mr. E. R. Alston, Sir Victor Brooke and others; the Proceedings and Journals of the Zoological, Linnean, and Asiatic Societies, and the correspondence in The Asian; so that after all my own share is minimised to a few remarks here and there, based on personal experience during a long period of jungle life, and on observation of the habits of animals in their wild state, and also in captivity, having made a large collection of living specimens from time to time.

As regards classification, Cuvier's system is the most popular, so I shall adopt it to a certain extent, keeping it as a basis, but engrafting on it such modifications as have met with the approval of modern naturalists. For comparison I give below a synopsis of Cuvier's arrangement. I have placed Cetacea after Carnivora, and Edentata at the end. In this I have followed recent authors as well as Jerdon, whose running numbers I have preserved as far as possible for purposes of reference.

Cuvier divides the Mammals into nine orders, as follows. (The examples I give are Indian ones, except where stated otherwise):—