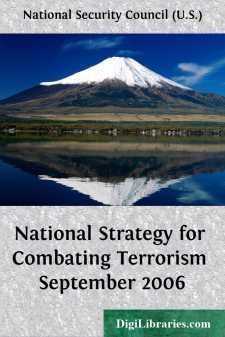 America is at war with a transnational terrorist movement fueled by a radical ideology of hatred, oppression, and murder. Our National Strategy for Combating Terrorism, first published in February 2003, recognizes that we are at war and that protecting and defending the Homeland, the American people, and their livelihoods remains our first and most solemn obligation.

Our strategy also recognizes that the War on Terror is a different kind of war. From the beginning, it has been both a battle of arms and a battle of ideas. Not only do we fight our terrorist enemies on the battlefield, we promote freedom and human dignity as alternatives to the terrorists' perverse vision of oppression and totalitarian rule. The paradigm for combating terrorism now involves the application of all elements of our national power and influence. Not only do we employ military power, we use diplomatic, financial, intelligence, and law enforcement activities to protect the Homeland and extend our defenses, disrupt terrorist operations, and deprive our enemies of what they need to operate and survive. We have broken old orthodoxies that once confined our counterterrorism efforts primarily to the criminal justice domain.

This updated strategy sets the course for winning the War on Terror. It builds directly from the National Security Strategy issued in March 2006 as well as the February 2003 National Strategy for Combating Terrorism, and incorporates our increased understanding of the enemy. From the beginning, we understood that the War on Terror involved more than simply finding and bringing to justice those who had planned and executed the terrorist attacks on September 11, 2001. Our strategy involved destroying the larger al-Qaida network and also confronting the radical ideology that inspired others to join or support the terrorist movement. Since 9/11, we have made substantial progress in degrading the al-Qaida network, killing or capturing key lieutenants, eliminating safehavens, and disrupting existing lines of support. Through the freedom agenda, we also have promoted the best long-term answer to al-Qaida's agenda: the freedom and dignity that comes when human liberty is protected by effective democratic institutions.

In response to our efforts, the terrorists have adjusted, and so we must continue to refine our strategy to meet the evolving threat. Today, we face a global terrorist movement and must confront the radical ideology that justifies the use of violence against innocents in the name of religion. As laid out in this strategy, to win the War on Terror, we will:

—Advance effective democracies as the long-term antidote to the ideology of terrorism;

—Deny weapons of mass destruction to rogue states and terrorist allies who seek to use them;

—Deny terrorists the support and sanctuary of rogue states;

—Deny terrorists control of any nation they would use as a base and launching pad for terror; and

—Lay the foundations and build the institutions and structures we need to carry the fight forward against terror and help ensure our ultimate success.