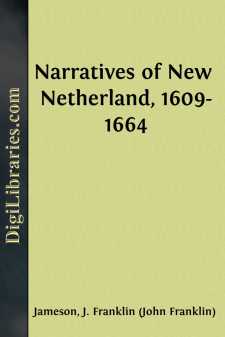 THE established church in the United Netherlands was the Reformed Church. Its polity was that of Geneva or of Presbyterianism. The minister and ruling or lay elders of the local church formed its consistory, corresponding to the Scottish or American kirk session. The next higher power, administrative or judicial, resided in the classis, consisting of all the ministers in a given district and one elder from each parish therein, and corresponding to the presbytery. It had power to license and ordain, install and remove ministers. Above this body stood the provincial synod, and above that the (occasional) national synods. In 1624 the synod of North Holland decreed that supervision over the churches in the East Indies should belong to the churches and classes within whose bounds were located the various "chambers" of the East India Company. The same rule was applied in the case of the West India Company's settlements. Under this rule the first minister sent out to New Netherland was placed under the jurisdiction of the Classis of Amsterdam, since the colony was under the charge of the Amsterdam Chamber. Many extracts from the minutes of that classis, and what remains of its correspondence with the ministers in New Netherland, are printed in the volumes published by the State of New York under the title Ecclesiastical Records, State of New York (six volumes, Albany, 1901-1905). From 1639, if not earlier, a committee of the classis, called "Deputati ad Res Exteras," was given charge of most of the details of correspondence with the Dutch Reformed churches in America, Africa, the East and foreign European countries.

As mentioned by Wassenaer, "comforters of the sick," who were Ecclesiastical officers but not ministers, were first sent Out to New Netherland. The first minister was Reverence Jonas Jansen Michielse, or, to employ the Latinized form of his name which he, according to clerical habit, was accustomed to use, Jonas Johannis Michaelius. Michaelius was born in North Holland in 1577, entered the University of Leyden as a student of divinity in 1600, became minister at Nieuwbokswoude in 1612 and at Hem, near Enkhuizen, in 1614. At some time between April, 1624, and August, 1625, he went out to San Salvador (Bahia, Brazil), recently conquered by the West India Company's fleet, and after brief service there to one Of their posts on the West African coast. Returning thence, He was, early in 1628, sent out to Manhattan, where he arrived April 7. It is not known just when he returned to Holland, but he appears to have been under engagement for three years. In 1637-1638 we find the classis vainly endeavoring to send him again to New Netherland, but prevented by the Company, which had a veto upon all such appointments in its dominions.

About half a century ago the following precious letter of Michaelius, describing New Netherland as it appeared in its earliest days to the eyes of an educated clergyman of the Dutch Church, was discovered in Amsterdam, and printed by Mr....