Narrative of the shipwreck of the brig Betsey, of Wiscasset, Maine, and murder of five of her crew, by pirates, on the coast of Cuba, Dec. 1824. 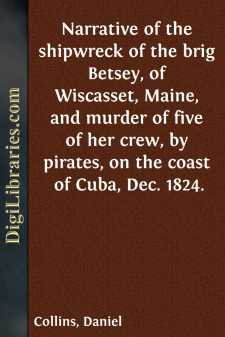 On the 28th of November, 1824, I sailed from Wiscasset, (Me.) for Matanzas, in the Island of Cuba, on board the brig Betsey, laden with lumber; our officers and crew consisting of seven, viz. Ellis Hilton, of Wiscasset, master; Joshua Merry, of Edgecomb, 1st mate; Daniel Collins, of Wiscasset, 2d mate; Charles Manuel, (a Portuguese), Seth Russell, and Benj. Bridge, seamen; and Detrey Jeome, cook. On the 18th of December we passed the Berry Islands, and early next morning came to anchor within a league of Orange Key, on the Bahama Banks. It was the morning of the Sabbath, so calm and clear that even the lengthened billows of the Gulf Stream seemed sleeping around us, and the most untutored son of Neptune could not but remember that it was a holy day, consecrated to devotion and rest. Here we continued until noon, when a fresh breeze from the North invited us to weigh anchor and unfurl our sails, which, swelling with a fair wind, were as buoyant as our own spirits, at the increasing prospect of reaching our port of destination.

Our course was W. S. W. that afternoon and night. At 4 o'clock next morning, by order of Capt. Hilton, who had been sick most of the passage out, and was now unable to appear on deck during the night, we kept her away one point, steering S. W. by W. calculating the current easterly at three knots, which he supposed would clear us of the Double Headed Shot Keys.

About sunset, a dark and stormy night approaching, I suggested to our Captain the propriety of shortening sail, to which he would not assent, presuming we might get into Matanzas the next day. The night was so dark that we could not discover objects distinctly beyond the length of the vessel, and the wind blew more than an usual wholesale breeze, which drove her, heavy-laden as she was, at the rate of 9 knots, calculating ourselves more than 6 leagues to the windward of the Double Headed Shot Keys. At half past 2 o'clock I was relieved at the helm, and after casting a glance over the lee side and discovering no alteration in the appearance of the water, I observed to my shipmate at the helm, "there is no fear of you"—went below and turned in with my clothes on. No one was below at this time except the Captain, who stood at the foot of the companion way viewing the appearance of the weather.

I had been in my birth about half an hour when I felt a tremendous shock, which covered me with the muskets that were over head, boxes, barrels and other cabin articles; the water pouring into my birth through the quarter. I cleared myself by a violent effort, ran for the companion way—it was gone—turned—leaped through the sky light, and was on deck in an instant. We were in the hollow of a sea, and I could just discern over our main peak the dark top of the rock, which we had struck, stem on, then going at the rate of nine knots. This rock, which some of our crew supposed to be a wreck, was concealed from the helmsman by the mainsail. Two of the crew were at the pumps—the deck load, which consisted of boards, scantlings and oars, piled on each side as high as their heads—the other two people were probably on the quarter deck. It was a careless watch for a dark night, even at our supposed distance from the Keys; but we were now in no situation to complain. A part of our stern and the yawl at the davits, had gone together. I ran forward to clear the anchors in order to prevent her from ranging ahead on another rock which I could perceive among the surf; but a greater part of the bows were gone, and with them the anchors.—The water was already groaning under the deck—she arose for the last time on the crest of another sea nearly to the top of the rock, quivering like a bird under its death-wound. Our Captain and crew were around the long-boat endeavoring to cut the leashings and right her, while I secured a compass, an axe, a bucket and several oars. The next sea we descended she struck; opened fore and aft, the masts and spars, with all sails standing, thundering against the rock, and the lumber from below deck cracking and crashing in every direction....