Narrative of the Life of Moses Grandy, Late a Slave in the United States of America 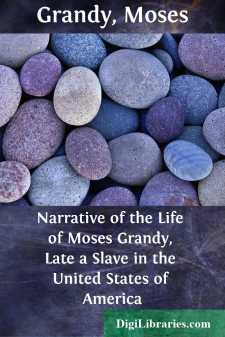 About a fortnight ago, the subject of the following brief Memoir came to me, bearing with him a letter from a dear friend and distinguished abolitionist in the United States, from which the following is an extract:—'I seize my pen in haste to gratify a most worthy colored friend of mine, by giving him a letter of introduction to you, as he intends sailing this week (August 8th, 1842) for Liverpool and London, via New Orleans. His name is Moses Grandy. He knows what it is to have been a slave, and what are the tender mercies of the southern slave-drivers. His history is not only authentic, but most extraordinary, and full of thrilling interest. Could it be published, it would make a deep sensation in every quarter. He was compelled to buy his freedom three times over! He paid for it $1,850. He has since bought his wife, and one or two of his children; and before going to England will first go to New Orleans, to purchase some of his other children, if he can find them, who are still held in captivity. His benevolence, affection, kindness of heart, and elasticity of spirit, are truly remarkable. He has a good head, a fine countenance, and a great spirit, notwithstanding his education has been obtained in the horrible school of slavery. Just get him to tell you his narrative, and if you happen to have an anti-slavery meeting, let him tell his tale to a British audience.' In the letter of another highly esteemed friend, he is spoken of as 'unsurpassed for faithfulness and perseverance;' in the letter of a third, as a 'worthy and respectable man.' On examining a book containing a list of the donations made him by American friends, in aid of his noble design to rescue from the miseries of slavery his relations, I found the names and certificates of persons of the highest respectability. It will be amply sufficient with those who are acquainted with the Abolitionists of the United States, for me to name General Fessenden, and Nathan Winslow, Esq., of Portland, Maine; the Rev. A.A. Phelps, Ellis Gray Loring, and Samuel E. Sewall, Esqs., of Boston, Massachusetts. Being satisfied, by these indubitable vouchers, of Moses Grandy's title to credit, I listened to his artless tale with entire confidence, and with a feeling of interest which all will participate who peruse the following pages. Considering his Narrative calculated to promote a more extensive knowledge of the workings of American slavery, and that its sale might contribute to the object which engages so entirely the mind of Moses, namely, the redemption of those who are in bonds, belonging to his family, I resolved to commit it to the press, as nearly as possible in the language of Moses himself. I have carefully abstained from casting a single reflection or animadversion of my own. I leave the touching story of the self-liberated captive to speak for itself, and the wish of my heart will be gratified, and my humble effort on his behalf be richly rewarded, if this little book is the means of obtaining for my colored brother the assistance which he seeks, or of increasing the zeal of those who are associated for the purpose of 'breaking every yoke and setting the oppressed free.'