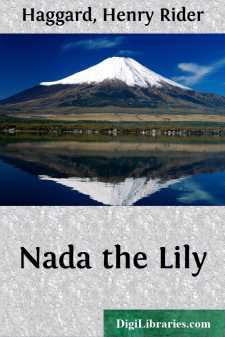 CHAPTER I. THE BOY CHAKA PROPHESIES

You ask me, my father, to tell you the tale of the youth of Umslopogaas, holder of the iron Chieftainess, the axe Groan-maker, who was named Bulalio the Slaughterer, and of his love for Nada, the most beautiful of Zulu women. It is long; but you are here for many nights, and, if I live to tell it, it shall be told. Strengthen your heart, my father, for I have much to say that is sorrowful, and even now, when I think of Nada the tears creep through the horn that shuts out my old eyes from light.

Do you know who I am, my father? You do not know. You think that I am an old, old witch-doctor named Zweete. So men have thought for many years, but that is not my name. Few have known it, for I have kept it locked in my breast, lest, thought I live now under the law of the White Man, and the Great Queen is my chieftainess, an assegai still might find this heart did any know my name.

Look at this hand, my father—no, not that which is withered with fire; look on this right hand of mine. You see it, though I who am blind cannot. But still, within me, I see it as it was once. Ay! I see it red and strong—red with the blood of two kings. Listen, my father; bend your ear to me and listen. I am Mopo—ah! I felt you start; you start as the regiment of the Bees started when Mopo walked before their ranks, and from the assegai in his hand the blood of Chaka (1) dropped slowly to the earth. I am Mopo who slew Chaka the king. I killed him with Dingaan and Umhlangana the princes; but the wound was mine that his life crept out of, and but for me he would never have been slain. I killed him with the princes, but Dingaan, I and one other slew alone.

(1) The Zulu Napoleon, one of the greatest geniuses and most wickedmen who ever lived. He was killed in the year 1828, havingslaughtered more than a million human beings.—ED.

What do you say? "Dingaan died by the Tongola."

Yes, yes, he died, but not there; he died on the Ghost Mountain; he lies in the breast of the old Stone Witch who sits aloft forever waiting for the world to perish. But I also was on the Ghost Mountain. In those days my feet still could travel fast, and vengeance would not let me sleep. I travelled by day, and by night I found him. I and another, we killed him—ah! ah!

There are great names in the story, my father. Yes, many have heard the names: when the Impis roared them out as they charged in battle, I have felt the mountains shake and seen the waters quiver in their sound. But where are they now? Silence has them, and the white men write them down in books. I opened the gates of distance for the holders of the names. They passed through and they are gone beyond. I cut the strings that tied them to the world....