Myths of Babylonia and Assyria 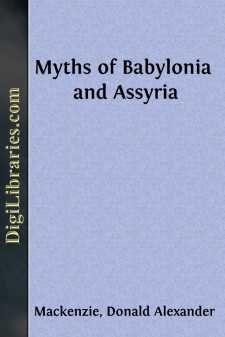 Ancient Babylonia has made stronger appeal to the imagination of Christendom than even Ancient Egypt, because of its association with the captivity of the Hebrews, whose sorrows are enshrined in the familiar psalm:

By the rivers of Babylon, there we sat down; Yea, we wept, when we remembered Zion. We hanged our harps upon the willows....

In sacred literature proud Babylon became the city of the anti-Christ, the symbol of wickedness and cruelty and human vanity. Early Christians who suffered persecution compared their worldly state to that of the oppressed and disconsolate Hebrews, and, like them, they sighed for Jerusalem--the new Jerusalem. When St. John the Divine had visions of the ultimate triumph of Christianity, he referred to its enemies--the unbelievers and persecutors--as the citizens of the earthly Babylon, the doom of which he pronounced in stately and memorable phrases:

Babylon the great is fallen, is fallen, And is become the habitation of devils, And the hold of every foul spirit, And a cage of every unclean and hateful bird....   For her sins have reached unto heaven And God hath remembered her iniquities.... The merchants of the earth shall weep and mourn over her,  For no man buyeth their merchandise any more.

"At the noise of the taking of Babylon", cried Jeremiah, referring to the original Babylon, "the earth is moved, and the cry is heard among the nations.... It shall be no more inhabited forever; neither shall it be dwelt in from generation to generation." The Christian Saint rendered more profound the brooding silence of the desolated city of his vision by voicing memories of its beauty and gaiety and bustling trade:

So for nearly two thousand years has the haunting memory of the once-powerful city pervaded Christian literature, while its broken walls and ruined temples and palaces lay buried deep in desert sand. The history of the ancient land of which it was the capital survived in but meagre and fragmentary form, mingled with accumulated myths and legends. A slim volume contained all that could be derived from references in the Old Testament and the compilations of classical writers.

It is only within the past half-century that the wonderful story of early Eastern civilization has been gradually pieced together by excavators and linguists, who have thrust open the door of the past and probed the hidden secrets of long ages. We now know more about "the land of Babel" than did not only the Greeks and Romans, but even the Hebrew writers who foretold its destruction....