Myths and Marvels of Astronomy 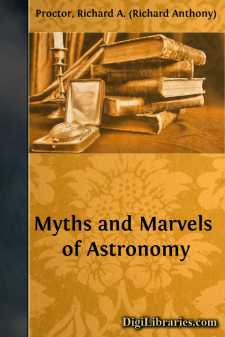 Signs and planets, in aspects sextile, quartile, trine, conjoined, or opposite; houses of heaven, with their cusps, hours, and minutes; Almuten, Almochoden, Anahibazon, Catahibazon; a thousand terms of equal sound and significance.—Guy Mannering.

... Come and see! trust thine own eyes.A fearful sign stands in the house of life,An enemy: a fiend lurks close behindThe radiance of thy planet—oh! be warned!—Coleridge.

Astrology possesses a real interest even in these days. It is true that no importance attaches now even to the discussion of the considerations which led to the rejection of judicial astrology. None but the most ignorant, and therefore superstitious, believe at present in divination of any sort or kind whatsoever. Divination by the stars holds no higher position than palmistry, fortune-telling by cards, or the indications of the future which foolish persons find in dreams, tea-dregs, salt-spilling, and other absurdities. But there are two reasons which render the history of astrology interesting. In the first place, faith in stellar influences was once so widespread that astrological terminology came to form a part of ordinary language, insomuch that it is impossible rightly to understand many passages of ancient and mediæval literature, or rightly to apprehend the force of many allusions and expressions, unless the significance of astrological teachings to the men of those times be recognised. In the second place, it is interesting to examine how the erroneous teachings of astrology were gradually abandoned, to note the way in which various orders of mind rejected these false doctrines or struggled to retain them, and to perceive how, with a large proportion of even the most civilised races, the superstitions of judicial astrology were long retained, or are retained even to this very day. The world has still to see some superstitions destroyed which are as widely received as astrology ever was, and which will probably retain their influence over many minds long after the reasoning portion of the community have rejected them.

Even so far back as the time of Eudoxus the pretensions of astrologers were rejected, as Cicero informs us ('De Div.' ii. 42). And though the Romans were strangely superstitious in such matters, Cicero reasons with excellent judgment against the belief in astrology. Gassendi quotes the argument drawn by Cicero against astrology, from the predictions of the Chaldæans that Cæsar, Crassus, and Pompey would die 'in a full old age, in their own houses, in peace and honour,' whose deaths, nevertheless, were 'violent, immature, and tragical.' Cicero also used an argument whose full force has only been recognised in modern times. 'What contagion,' he asked, 'can reach us from the planets, whose distance is almost infinite?' It is singular that Seneca, who was well acquainted with the uniform character of the planetary motions, seems to have entertained no doubt respecting their influence. Tacitus expresses some doubts, but was on the whole inclined to believe in astrology....