Myths and Legends of Ancient Greece and Rome 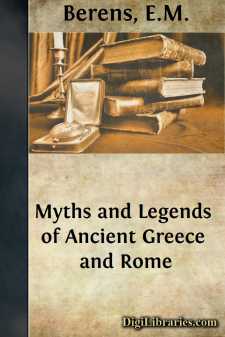 Before entering upon the many strange beliefs of the ancient Greeks, and the extraordinary number of gods they worshipped, we must first consider what kind of beings these divinities were.

In appearance, the gods were supposed to resemble mortals, whom, however, they far surpassed in beauty, grandeur, and strength; they were also more commanding in stature, height being considered by the Greeks an attribute of beauty in man or woman. They resembled human beings in their feelings and habits, intermarrying and having children, and requiring daily nourishment to recruit their strength, and refreshing sleep to restore their energies. Their blood, a bright ethereal fluid called Ichor, never engendered disease, and, when shed, had the power of producing new life.

The Greeks believed that the mental qualifications of their gods were of a much higher order than those of men, but nevertheless, as we shall see, they were not considered to be exempt from human passions, and we frequently behold them actuated by revenge, deceit, and jealousy. They, however, always punish the evil-doer, and visit with dire calamities any impious mortal who dares to neglect their worship or despise their rites. We often hear of them visiting mankind and partaking of their hospitality, and not unfrequently both gods and goddesses become attached to mortals, with whom they unite themselves, the offspring of these unions being called heroes or demi-gods, who were usually renowned for their great strength and courage. But although there were so many points of resemblance between gods and men, there remained the one great characteristic distinction, viz., that the gods enjoyed immortality. Still, they were not invulnerable, and we often hear of them being wounded, and suffering in consequence such exquisite torture that they have earnestly prayed to be deprived of their privilege of immortality.

The gods knew no limitation of time or space, being able to transport themselves to incredible distances with the speed of thought. They possessed the power of rendering themselves invisible at will, and could assume the forms of men or animals as it suited their convenience. They could also transform human beings into trees, stones, animals, &c., either as a punishment for their misdeeds, or as a means of protecting the individual, thus transformed, from impending danger. Their robes were like those worn by mortals, but were perfect in form and much finer in texture. Their weapons also resembled those used by mankind; we hear of spears, shields, helmets, bows and arrows, &c., being employed by the gods. Each deity possessed a beautiful chariot, which, drawn by horses or other animals of celestial breed, conveyed them rapidly over land and sea according to their pleasure. Most of these divinities lived on the summit of Mount Olympus, each possessing his or her individual habitation, and all meeting together on festive occasions in the council-chamber of the gods, where their banquets were enlivened by the sweet strains of Apollo's lyre, whilst the beautiful voices of the Muses poured forth their rich melodies to his harmonious accompaniment....