Myth and Science An Essay 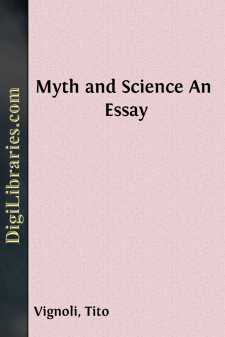 CHAPTER I. THE IDEAS AND SOURCES OF MYTH.

Myth, as it is understood by us, and as It will be developed and explained in this work, cannot be defined in summary terms, since its multiform and comprehensive nature embraces and includes all primitive action, as well as much which is consecutive and historical in the intelligence and feelings of man, with respect to the immediate and the reflex interpretation of the world, of the Individual, and of the society in which our common life is passed.

We hold that myth is, in its most general and comprehensive nature, the spontaneous and imaginative form in which the human intelligence and human emotions conceive and represent themselves and things in general; it is the psychical and physical mode in which man projects himself into all those phenomena which he is able to apprehend and perceive.

We do not propose to consider in this treatise the myths peculiar to one people, nor to one race; we do not seek to estimate the intrinsic value of myths at the time when they were already developed among various peoples, and constituted into an Olympus, or special religion; we do not wish to determine the special and historical cause of their manifestations in the life of any one people, since we now refrain from entering on the field of comparative mythology. It is the scope and object of our modest researches to trace the strictly primitive origin of the human myths as a whole; to reach the ultimate fact, and the causes of this fact, whence myth, in its necessary and universal form, is evolved and has its origin.

We must therefore seek to discover whether, in addition to the various causes assigned for myth in earlier ages, and still more in modern times by our great philologists, ethnologists, and philosophers of every school—causes which are for the most part extrinsic—there be not a reason more deeply seated in our nature, which is first manifested as a necessary and spontaneous function of the intelligence, and which is therefore intrinsic and inevitable.

In this case myth will appear to us, not as an accident in the life of primitive peoples varying in intensity and extent, not as a vague conception of things due to the erroneous interpretation of words and phrases, nor again as the fanciful creation of ignorant minds; but it will appear to be a special faculty of the human mind, inspired by emotions which accompany and animate its products. Since this innate faculty of myth is indigenous and common to all men, it will not only be the portion of all peoples, but of each individual in every age, in every race, whatever may be their respective conditions.

Myth, therefore, will not be resolved by us into a manifestation of an obsolete age, or of peoples still in a barbarous and savage state, nor as part of the cycle through which nations and individuals have, respectively passed, or have nearly passed; but it remains to this day, in spite of the prevailing civilisation which has greatly increased and is still increasing, it still persists as a mode of physical and intellectual force in the organic elements which constitute it....