My Schools and Schoolmasters or The Story of my Education. 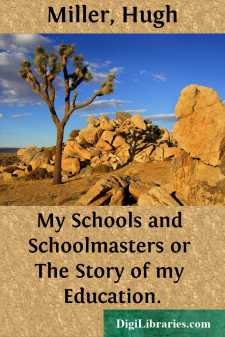 CHAPTER I. "Ye gentlemen of England, Who live at home at ease, Oh, little do ye think upon The dangers of the seas."—Old Song.

Rather more than eighty years ago, a stout little boy, in his sixth or seventh year, was despatched from an old-fashioned farm-house in the upper part of the parish of Cromarty, to drown a litter of puppies in an adjacent pond. The commission seemed to be not in the least congenial. He sat down beside the pool, and began to cry over his charge; and finally, after wasting much time in a paroxysm of indecision and sorrow, instead of committing the puppies to the water, he tucked them up in his little kilt, and set out by a blind pathway which went winding through the stunted heath of the dreary Maolbuoy Common, in a direction opposite to that of the farm-house—his home for the two previous twelvemonths. After some doubtful wandering on the waste, he succeeded in reaching, before nightfall, the neighbouring seaport town, and presented himself, laden with his charge, at his mother's door. The poor woman—a sailor's widow, in very humble circumstances—raised her hands in astonishment: "Oh, my unlucky boy," she exclaimed, "what's this?—what brings you here?" "The little doggies, mither," said the boy; "I couldna drown the little doggies; and I took them to you." What afterwards befell the "little doggies," I know not; but trivial as the incident may seem, it exercised a marked influence on the circumstances and destiny of at least two generations of creatures higher in the scale than themselves. The boy, as he stubbornly refused to return to the farm-house, had to be sent on shipboard, agreeably to his wish, as a cabin-boy; and the writer of these chapters was born, in consequence, a sailor's son, and was rendered, as early as his fifth year, mainly dependent for his support on the sedulously plied but indifferently remunerated labours of his only surviving parent, at the time a sailor's widow.

The little boy of the farm-house we a descended from a long line of seafaring men,—skilful and adventurous sailors,—some of whom had coasted along the Scottish shores as early as the times of Sir Andrew Wood and the "bold Bartons," and mayhap helped to man that "verrie monstrous schippe the Great Michael," that "cumbered all Scotland to get her to sea." They had taken as naturally to the water as the Newfoundland dog or the duckling. That waste of life which is always so great in the naval profession had been more than usually so in the generation just passed away. Of the boy's two uncles, one had sailed round the world with Anson, and assisted in burning Paita, and in boarding the Manilla galleon; but on reaching the English coast he mysteriously disappeared, and was never more heard of. The other uncle, a remarkably handsome and powerful man,—or, to borrow the homely but not inexpressive language in which I have heard him described, "as pretty a fellow as ever stepped in shoe-leather,"—perished at sea in a storm; and several years after, the boy's father, when entering the Firth of Cromarty, was struck overboard, during a sudden gust, by the boom of his vessel, and, apparently stunned by the blow, never rose again....