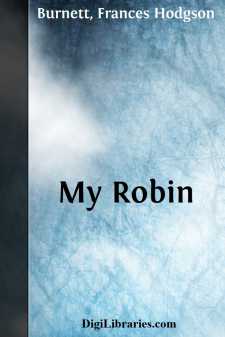 There came to me among the letters I received last spring one which touched me very closely. It was a letter full of delightful things but the delightful thing which so reached my soul was a question. The writer had been reading "The Secret Garden" and her question was this: "Did you own the original of the robin? He could not have been a mere creature of fantasy. I feel sure you owned him." I was thrilled to the centre of my being. Here was some one who plainly had been intimate with robins— English robins. I wrote and explained as far as one could in a letter what I am now going to relate in detail.

I did not own the robin—he owned me—or perhaps we owned each other. He was an English robin and he was a PERSON—not a mere bird. An English robin differs greatly from the American one. He is much smaller and quite differently shaped. His body is daintily round and plump, his legs are delicately slender. He is a graceful little patrician with an astonishing allurement of bearing. His eye is large and dark and dewy; he wears a tight little red satin waistcoat on his full round breast and every tilt of his head, every flirt of his wing is instinct with dramatic significance. He is fascinatingly conceited—he burns with curiosity—he is determined to engage in social relations at almost any cost and his raging jealousy of attention paid to less worthy objects than himself drives him at times to efforts to charm and distract which are irresistible. An intimacy with a robin—an English robin—is a liberal education.

This particular one I knew in my rose-garden in Kent. I feel sure he was born there and for a summer at least believed it to be the world. It was a lovesome, mystic place, shut in partly by old red brick walls against which fruit trees were trained and partly by a laurel hedge with a wood behind it. It was my habit to sit and write there under an aged writhen tree, gray with lichen and festooned with roses. The soft silence of it— the remote aloofness—were the most perfect ever dreamed of. But let me not be led astray by the garden. I must be firm and confine myself to the Robin. The garden shall be another story. There were so many people in this garden—people with feathers, or fur—who, because I sat so quietly, did not mind me in the least, that it was not a surprising thing when I looked up one summer morning to see a small bird hopping about the grass a yard or so away from me. The surprise was not that he was there but that he STAYED there—or rather he continued to hop—with short reflective-looking hops and that while hopping he looked at me— not in a furtive flighty way but rather as a person might tentatively regard a very new acquaintance. The absolute truth of the matter I had reason to believe later was that he did not know I was a person. I may have been the first of my species he had seen in this rose-garden world of his and he thought I was only another kind of robin. I was too— though that was a secret of mine and nobody but myself knew it....