My Reminiscences of the Anglo-Boer War 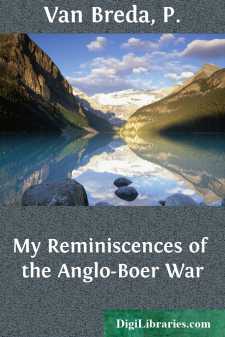 THE AUTHOR TO THE READER.

In offering my readers my reminiscences of the late War, I feel that it is necessary to ask their indulgence and to plead extenuating circumstances for many obvious shortcomings.

It should be pointed out that the preparation of this work was attended with many difficulties and disabilities, of which the following were only a few:—

(1) This is my first attempt at writing a book, and as a simple Afrikander I lay no claim to any literary ability.

(2) When captured by the British forces I was deprived of all my notes, and have been compelled to consult and depend largely upon my memory for my facts and data. I would wish to add, however, that the notes and minutiæ they took from me referred only to events and incidents covering six months of the War. Twice before my capture, various diaries I had compiled fell into British hands; and on a third occasion, when our camp at Dalmanutha was burned out by a "grass-fire," other notes were destroyed.

(3) I wrote this book while a prisoner-of-war, fettered, as it were, by the strong chains with which a British "parole" is circumscribed. I was, so to say, bound hand and foot, and always made to feel sensibly the humiliating position to which we, as prisoners-of-war on this island, were reduced. Our unhappy lot was rendered unnecessarily unpleasant by the insulting treatment offered us by Colonel Price, who appeared to me an excellent prototype of Napoleon's custodian, Sir Hudson Lowe. One has only to read Lord Rosebery's work, "The Last Phase of Napoleon," to realise the insults and indignities Sir Hudson Lowe heaped upon a gallant enemy.

We Boers experienced similar treatment from our custodian, Colonel Price, who appeared to be possessed with the very demon of distrust and who conjured up about us the same fantastic and mythical plans of escape as Sir Hudson Lowe attributed to Napoleon. It is to his absurd suspicions about our safe custody that I trace the bitterly offensive regulations enforced on us.

While engaged upon this work, Colonel Price could have pounced down upon me at any moment, and, having discovered the manuscript, would certainly have promptly pronounced the writing of it in conflict with the terms of my "parole."

I have striven as far as possible to refrain from criticism, except when compelled to do so, and to give a coherent story, so that the reader may easily follow the episodes I have sketched. I have also endeavoured to be impartial, or, at least, so impartial as an erring human being can be who has just quitted the bloody battlefields of a bitter struggle.

But the sword is still wet, and the wound is not yet healed.

I would assure my readers that it has not been without hesitation that I launch this work upon the world. There have been many amateur and professional writers who have preceded me in overloading the reading public with what purport to be "true histories" of the War. But having been approached by friends to add my little effort to the ponderous tomes of War literature, I have written down that which I saw with my own eyes, and that which I personally experienced. If seeing is believing, the reader may lend credence to my recital of every incident I have herein recounted.

During the last stages of the struggle, when we were isolated from the outside world, we read in newspapers and other printed matter captured from the British so many romantic and fabulous stories about ourselves, that we were sometimes in doubt whether people in Europe and elsewhere would really believe that we were ordinary human beings and not legendary monsters. On these occasions I read circumstantial reports of my death, and once a long, and by no means flattering, obituary (extending over several columns of a newspaper) in which I was compared to Garibaldi, "Jack the Ripper," and Aguinaldo....