My Private Menagerie from The Works of Theophile Gautier Volume 19 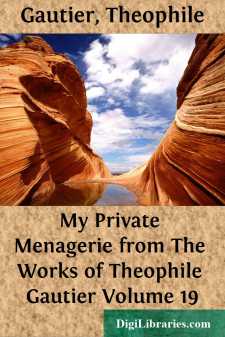 I have often been caricatured in Turkish dress seated upon cushions, and surrounded by cats so familiar that they did not hesitate to climb upon my shoulders and even upon my head. The caricature is truth slightly exaggerated, and I must own that all my life I have been as fond of animals in general and of cats in particular as any brahmin or old maid. The great Byron always trotted a menagerie round with him, even when travelling, and he caused to be erected, in the park of Newstead Abbey, a monument to his faithful Newfoundland dog Boatswain, with an inscription in verse of his own inditing. I cannot be accused of imitation in the matter of our common liking for dogs, for that love manifested itself in me at an age when I was yet ignorant of the alphabet.

A clever man being at this time engaged in preparing a “History of Animals of Letters,” I jot down these notes in which he may find, so far as my own animals are concerned, trustworthy information.

The earliest remembrance of this sort that I have goes back to the time of my arrival in Paris from Tarbes. I was then three years old, so that it is difficult to credit the statement made by Mirecourt and Vapereau, who affirm that I “proved but an indifferent pupil” in my native town. Home-sickness of a violence that no one would credit a child with being capable of experiencing, fell upon me. I spoke our local dialect only, and people who talked French “were not mine own people.” I would wake in the middle of the night and inquire whether we were not soon to start on our return to our own land.

No dainty tempted me, no toy could amuse me. Drums and trumpets equally failed to relieve my gloom. Among the objects and beings I regretted figured a dog called Cagnotte, whom it had been found impossible to bring with us. His absence told on me to such an extent that one morning, having first chucked out of the window my little tin soldiers, my German village with its painted houses, and my bright red fiddle, I was about to take the same road to return as speedily as possible to Tarbes, the Gascons, and Cagnotte. I was grabbed by the jacket in the nick of time, and Josephine, my nurse, had the happy thought to tell me that Cagnotte, tired of waiting for us, was coming that very day by the stage-coach. Children accept the improbable with artless faith; nothing strikes them as impossible; only, they must not be deceived, for there is no impairing the fixity of a settled idea in their brains. I kept asking, every fifteen minutes, whether Cagnotte had not yet come. To quiet me, Josephine bought on the Pont-Neuf a little dog not unlike the Tarbes specimen. I did not feel sure of its identity, but I was told that travelling changed dogs very much. I was satisfied with the explanation and accepted the Pont-Neuf dog as being the authentic Cagnotte. He was very gentle, very amiable, and very well behaved. He would lick my cheeks, and indeed his tongue was not above licking also the slices of bread and butter cut for my afternoon tea. We lived on the best of terms with each other.

Presently, however, the supposed Cagnotte became sad, troubled, and his movements lost their freedom. He found it difficult to curl himself up, lost his jolly agility, breathed hard and could not eat. One day, while caressing him, I felt a seam that ran down his stomach, which was much swelled and very tight. I called my nurse. She came, took a pair of scissors cut the thread, and Cagnotte, freed of a sort of overcoat made of curled lambskin, in which he had been tricked out by the Pont-Neuf dealers to make him look like a poodle, appeared in all the wretched guise and ugliness of a street cur, a worthless mongrel....