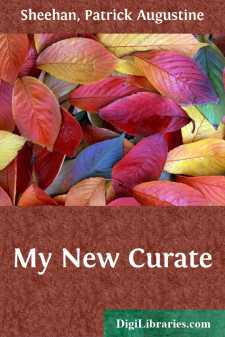 It is all my own fault. I was too free with my tongue. I said in a moment of bitterness: "What can a Bishop do with a parish priest? He's independent of him." It was not grammatical, and it was not respectful. But the bad grammar and the impertinence were carried to his Lordship, and he answered: "What can I do? I can send him a curate who will break his heart in six weeks."

I was not too much surprised, then, when one evening my dear old friend and curate, Father Tom Laverty, came to me, with tears in his eyes and an open letter in his hand:—

It was a succinct, laconic order to present himself to a parish priest twenty miles distant, and to be in time to discharge his duties in that parish the following Saturday and Sunday, for his jurisdiction was transferred, etc.

It was a hard stroke. I was genuinely attached to Father Tom. We had the same tastes and habits,—easy, contented, conservative, with a cordial dislike of innovations of any kind. We held the same political opinions, preached the same sermons, administered the Sacraments in the old way, and had a reverence for antiquities in general. It was a sad break in my life to part with him; and it is a harmless vanity on my part to say that he was sorry to part from me.

"I suppose there's no help for it?" said he.

"No use," said he; "when he has made up his mind you might as well be talking to a milestone."

"And you must be off to-morrow?" said I, consulting the bishop's letter.

"And who am I getting?" I wondered.

"Hard to guess," said he. He was in no humor for conversation.

The following week, that most melancholy of processions, a curate's furniture en route, filed slowly through the village, and out along the highroad, that led through bog and fen, and by lake borders to the town of N——. First came three loads of black turf, carefully piled and roped; then two loads of hay; a cow with a yearling calf; and lastly, the house furniture, mostly of rough deal. The articles, that would be hardly good enough for one of our new laborers' cottages, were crowned by a kitchen table, its four legs pointing steadily to the firmament, like an untrussed fowl's, and between them, carefully roped, was the plague and the pet of the village, Nanny the goat, with her little kid beside her. What Nanny could not do in the way of mischief was so insignificant, that it need not be told. But the Celtic vocabulary, particularly rich in expletives, failed to meet the ever-growing vituperative wants of the villagers. They had to fall back on the Saxon, and call her a "rep," "a rip," "de ribble," etc., etc. I walked side by side with Father Laverty, who, with head bent on his breast, scarcely noticed the lamentations of the women, who came to their cross-doors, and poured out a Jeremiad of lamentations that made me think my own well-meant ministrations were but scantily appreciated.

"Wisha, God be wid you, Father, wherever you go!"

"Wisha, may your journey thry wid you. Sure 't is we'll miss you!"

"Bishop, inagh, 't is aisy for him wid his ring and his mitre, and his grand carriage. Couldn't he let him alone?"

"Father," said a young girl, earnestly, her black hair blinding her eyes, "may God be with you." She ran after him. "Pray for me," she whispered. "You don't know all the good you done me." She hadn't been very sensible.

He turned towards her.

"Yes! Nance, I'll remember you. And don't forget all that I told you."

He held out his hand. It was such an honor, such a condescension, that she blushed scarlet: and hastily rubbing her hand in her apron, she grasped his.

"May God Almighty bless you," she said.

But the great trial came when we were passing the school-house....