My Memories of Eighty Years 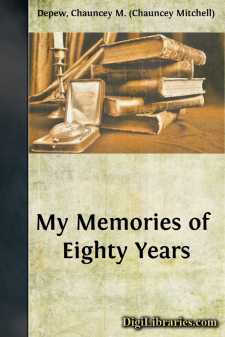 I. CHILDHOOD AND YOUTH

It has occurred to me that some reminiscences of a long life would be of interest to my family and friends.

My memory goes back for more than eighty years. I recall distinctly when about five years old my mother took me to the school of Mrs. Westbrook, wife of the well-known pastor of the Dutch Reformed church, who had a school in her house, within a few doors. The lady was a highly educated woman, and her husband, Doctor Westbrook, a man of letters as well as a preacher. He specialized in ancient history, and the interest he aroused in Roman and Greek culture and achievements has continued with me ever since.

The village of Peekskill at that time had between two and three thousand inhabitants. Its people were nearly all Revolutionary families who had settled there in colonial times. There had been very little immigration either from other States or abroad; acquaintance was universal, and in the activities of the churches there was general co-operation among the members. Church attendance was so unanimous that people, young or old, who failed to be in their accustomed places on Sunday felt the disapproval of the community.

Social activities of the village were very simple, but very delightful and healthful. There were no very rich nor very poor. Nearly every family owned its own house or was on the way to acquire one. Misfortune of any kind aroused common interest and sympathy. A helping hand of neighborliness was always extended to those in trouble or distress. Peekskill was a happy community and presented conditions of life and living of common interest, endeavor, and sympathy not possible in these days of restless crowds and fierce competition.

The Peekskill Academy was the dominant educational institution, and drew students not only from the village but from a distance. It fitted them for college, and I was a student there for about twelve years. The academy was a character-making institution, though it lacked the thoroughness of the New England preparatory schools. Its graduates entering into the professions or business had an unusual record of success in life. I do not mean that they accumulated great fortunes, but they acquired independence and were prominent and useful citizens in all localities where they settled.

I graduated from the Peekskill Academy in 1852. I find on the programme of the exercises of that day, which some old student preserved, that I was down for several original speeches, while the other boys had mainly recitations. Apparently my teachers had decided to develop any oratorical talent I might possess.

I entered Yale in 1852 and graduated in 1856. The college of that period was very primitive compared with the university to which it has grown. Our class of ninety-seven was regarded as unusually large. The classics and mathematics, Greek and Latin, were the dominant features of instruction. Athletics had not yet appeared, though rowing and boat-racing came in during my term. The outstanding feature of the institution was the literary societies: the Linonia and the Brothers of Unity....