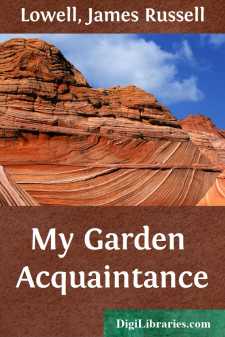 ONE of the most delightful books in my father's library was White's "Natural History of Selborne." For me it has rather gained in charm with years. I used to read it without knowing the secret of the pleasure I found in it, but as I grow older I begin to detect some of the simple expedients of this natural magic. Open the book where you will, it takes you out of doors. In our broiling July weather one can walk out with this genially garrulous Fellow of Oriel and find refreshment instead of fatigue. You have no trouble in keeping abreast of him as he ambles along on his hobby-horse, now pointing to a pretty view, now stopping to watch the motions of a bird or an insect, or to bag a specimen for the Honorable Daines Barrington or Mr. Pennant. In simplicity of taste and natural refinement he reminds one of Walton; in tenderness toward what he would have called the brute creation, of Cowper. I do not know whether his descriptions of scenery are good or not, but they have made me familiar with his neighborhood. Since I first read him, I have walked over some of his favorite haunts, but I still see them through his eyes rather than by any recollection of actual and personal vision. The book has also the delightfulness of absolute leisure. Mr. White seems never to have had any harder work to do than to study the habits of his feathered fellow-townsfolk, or to watch the ripening of his peaches on the wall. His volumes are the journal of Adam in Paradise,

"Annihilating all that's madeTo a green thought in a green shade."

It is positive rest only to look into that garden of his. It is vastly better than to

for thither ambassadors intrude to bring with them the noises of Rome, while here the world has no entrance. No rumor of the revolt of the American Colonies seems to have reached him. "The natural term of an hog's life" has more interest for him than that of an empire. Burgoyne may surrender and welcome; of what consequence is that compared with the fact that we can explain the odd tumbling of rooks in the air by their turning over "to scratch themselves with one claw"? All the couriers in Europe spurring rowel-deep make no stir in Mr. White's little Chartreuse;(1) but the arrival of the house-martin a day earlier or later than last year is a piece of news worth sending express to all his correspondents.

(1) La Grande Chartreuse was the original Carthusian monastery in France, where the most austere privacy was maintained.

Another secret charm of this book is its inadvertent humor, so much the more delicious because unsuspected by the author. How pleasant is his innocent vanity in adding to the list of the British, and still more of the Selbornian, fauna! I believe he would gladly have consented to be eaten by a tiger or a crocodile, if by that means the occasional presence within the parish limits of either of these anthropophagous brutes could have been established. He brags of no fine society, but is plainly a little elated by "having considerable acquaintance with a tame brown owl." Most of us have known our share of owls, but few can boast of intimacy with a feathered one. The great events of Mr. White's life, too, have that disproportionate importance which is always humorous. To think of his hands having actually been though worthy (as neither Willoughby's nor Ray's were) to hold a stilted plover, the Charadrius himaniopus, with no back toe, and therefore "liable, in speculation, to perpetual vacillations"! I wonder, by the way, if metaphysicians have no hind toes. In 1770 he makes the acquaintance in Sussex of "an old family tortoise," which had then been domesticated for thirty years. It is clear that he fell in love with it at first sight. We have no means of tracing the growth of his passion; but in 1780 we find him eloping with its object in a post-chaise. "The rattle and hurry of the journey so perfectly roused it that, when I turned it out in a border, it walked twice down to the bottom of my garden." It reads like a Court Journal: "Yesterday morning H.R.H. the Princess Alice took an airing of half an hour on the terrace of Windsor Castle." This tortoise might have been a member of the Royal Society, if he could have condescended to so ignoble an ambition. It had but just been discovered that a surface inclined at a certain angle with the plane of the horizon took more of the sun's rays. The tortoise had always known this (though he unostentatiously made no parade of it), and used accordingly to tilt himself up against the garden-wall in the autumn....