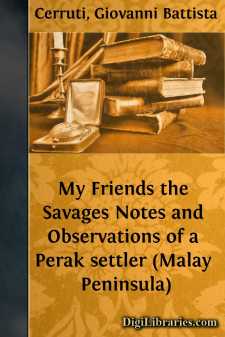 From the Bay of Bengal and the Gulf of Siam the Malay Peninsula, once known as the Golden Chersonese, jets out into the Indian Ocean like an arm stretched forth to unite once more within its embrace the innumerable isles that belt its coasts and that have probably been severed from the mainland by the combined force of Time and Sea.

In these surrounding islands, some as large as continents, others as narrow as reefs, over which civilization passes in squalls of cupidity, are concealed the strangest contrasts, for whilst around the shore human wolves disguised as civilized men are devouring souls, or (with due observance of the law) are usurping and stealing their neighbour's property and products, (the cleverest and most respected being he who best dissembles his rapacity or who knows how best to substitute unscrupulous shrewdness for industrial activity) not far off towards the centre of these scattered lands other men, in primitive ignorance of the law, are devouring their neighbours' flesh and skin or stealing their live bodies to serve as slaves.

But such curious contrasts are not after all so very striking when one considers that to devour souls and to devour flesh are both natural instincts of Man!

Around the coast of the Peninsula are many flourishing towns where every modern and up-to-date accommodation is to be found. These seaside resorts are thronged with a cosmopolitan population composed of tourists, business men, nabobs and adventurers. There life rolls on in the refined corruption of fashionable society amidst sports and amusements, scandals and intrigues, every race and every tongue contributing its share of good and evil. A motley crowd swarms their streets, presenting to the eye of an onlooker the picturesque spectacle that the contrast of costumes always produces. They are people of different colours, dress and education, attracted thither by the loadstone of wealth. The fortunate, the clever, the unscrupulous have already gained the victory in Life's struggles and now ride about in motor-cars of the newest types; the others look at them, most likely envy them, and work all the harder to get rich themselves. Will they succeed? The way, here is a short one but can only be successfully trodden by those who possess sound energy and blind confidence in their own brains and in their own muscles. It must not be thought, however, that the motor-car is a prerogative, in these parts, of opulent Europeans and Chinese for it is also a powerful auxiliary for those who are striving to make their fortunes through agricultural and mining speculations in the wildest regions of the Peninsula.

But whilst near the sea the inhabitants and travellers can enjoy all the luxuries and conveniences of the 20th century, in the interior of the Peninsula, leading a nomadic life in the thick of the jungle, which covers the range of mountains from north to south, a primitive people still exists. All unconscious of the violent passions and turbulent emotions that disturb the tranquillity of their fellow-creatures (civilized in form if not in fact) at some miles distant from them, they live quietly and peaceably in their forest homes preserving intact their original simplicity and ingenuousness.

The hot breath of our fagging life, that generates every sort of nerve complaint, has not yet reached their mountain haunts....