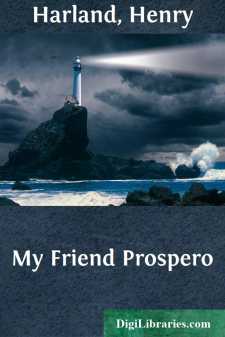 The coachman drew up his horses before the castle gateway, where their hoofs beat a sort of fanfare on the stone pavement; and the footman, letting himself smartly down, pulled, with a peremptory gesture that was just not quite a swagger, the bronze hand at the end of the dangling bell-cord.

Seated alone in her great high-swung barouche, in the sweet April weather, Lady Blanchemain gave the interval that followed to a consideration of the landscape: first, sleeping in shadowy stillness, the formal Italian garden, its terraced lawns and metrical parterres, its straight dark avenues of ilex, its cypresses, fountains, statues, balustrades; and then, laughing in the breeze and the sun, the wild Italian valley, a forest of blossoming fruit-trees, with the river winding and glinting in its midst, with olive-clad hills blue-grey at either side, and beyond the hills, peering over their shoulders, the snow-peaks of mountains, crisp against the sky, and in the level distance the hazy shimmer of the lake.

"It is lovely," she exclaimed, fervently, in a whisper, "lovely.—And only a generation of blind-worms," was her after-thought, "could discern in it the slightest resemblance to the drop-scene of a theatre."

Big, humorous, emotional, imperious, but, above all, interested and sociable Lady Blanchemain: do you know her, I wonder? Her billowy white hair? Her handsome soft old face, with its smooth skin, and the good strong bony structure underneath? Her beautiful old grey eyes, full of tenderness and shrewdness, of curiosity, irony, indulgence, overarched and emphasized by regular black eyebrows? Her pretty little plump pink-white hands, (like two little elderly Cupids), with their shining panoply of rings? And her luxurious, courageous, high-hearted manner of dressing? The light colours and jaunty fashion of her gowns? Her laces, ruffles, embroideries? Her gay little bonnets? Her gems? Linda Baroness Blanchemain, of Fring Place, Sussex; Belmore Gardens, Kensington; and Villa Antonina, San Remo: big, merry, sociable, sentimental, worldly-wise, impetuous Linda Blanchemain: do you know her? If you do, I am sure you love her and rejoice in her; and enough is said. If you don't, I beg leave to present and to commend her.

I spoke, by the bye, of her "old" face, her "old" eyes. She is, to be sure, in so far as mere numbers of years tell, an old woman. But I once heard her throw out, in the heat of conversation, the phrase, "a young old thing like me;" and I thought she touched a truth.

Well, then, the footman, in his masterful way, pulled the bell-cord; Lady Blanchemain contemplated the landscape, and had her opinion of a generation that could liken it to the drop-scene of a theatre; and in due process of things the bell was answered.

It was answered by a man in a costume that struck my humorous old friend as pleasing: a sallow little man whose otherwise quite featureless suit of tweeds was embellished by scarlet worsted shoulder-knots. With lack-lustre eyes, from behind the plexus of the grille, he rather stolidly regarded the imposing British equipage, and waited to be addressed....