My First Voyage to Southern Seas 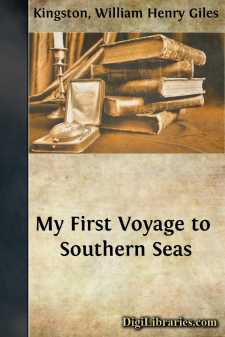 My English Home and Family—My Brother goes to Sea—Hear of the Loss of his Ship—My Father’s Death—We are reduced to Poverty—Resolve to visit my Grandfather, and to search for Alfred—Kindness of my Schoolmaster and Companions—My dog Solon.

Ours was a very united and a very happy family. We lived in the neighbourhood of London, near Blackheath, in Kent, on the elevated ground which overlooks Greenwich, its noble hospital, and the river Thames. Our father was a merchant, a thoroughly upright, industrious man, an honour to the profession to which he belonged. No man could be more attentive to business than he was, and yet no one enjoyed the country and the pursuits of the country more than he did. With what pleasure did we look forward, when we were children, to his return in the afternoon and even now I think I hear his cheerful laugh, and see his bland smile, as he took us up one by one in his arms and kissed us, and then often, though he must frequently have been tired and harassed, had a game of boisterous romps with us, seeming entirely to have forgotten all his cares and troubles. It was considered the privilege of little Kate, or one of the other young ones, to look slily into his pockets when, by a well-known significant gesture, he let us understand that they were not altogether empty. He had a little hand hamper or basket, such as many another paterfamilias possesses, which travelled with great regularity up and down nearly every day, and out of which all sorts of wonderful articles used to appear; and if a friend accompanied him unexpectedly down to dinner, our mother never had to complain that she was taken unawares and had nothing fit to offer him. The hamper, however, did not always contain eatables. Often our mother, or one of us, had been wishing very much for something which could not possibly have got into his pockets, and before many days were over, it was very nearly certain to make its appearance, when the top of the hamper was thrown back, imbedded in straw or paper. That dear old hamper always put us in mind of some magic chest in a fairy tale, only I doubt if any magic chest ever afforded so much pleasure, or produced so great a variety of articles as it did. I do not know if our kind father ever was out of humour; if he was, he left the appearance of it behind him in the city. Out of spirits he seldom or never was in my childhood’s days.

The time was coming when a sad change was to occur. I mention these traits, trivial though they may seem, because I think that they speak well of my father’s character. At the same time that he was a most affectionate father, he never forgot the necessity of correcting us for our faults; while he was deeply sensible of the importance of fitting us for the stations in life we might be destined to occupy, and of placing clearly before us the object of our existence on earth, and our duty to God and to our fellow-men. He watched over us with the most anxious solicitude during every moment he could spare; he took us out to walk with him, and had us constantly in his room, never wearying, apparently, of our society. This he did, I have no doubt, not only because he loved us, but that he might ascertain our different characters and dispositions, and at once eradicate, as far as he was able, each budding tendency to evil as it appeared....