My Discovery of England 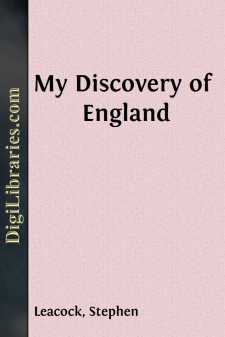 I. The Balance of Trade in Impressions

FOR some years past a rising tide of lecturers and literary men from England has washed upon the shores of our North American continent. The purpose of each one of them is to make a new discovery of America. They come over to us travelling in great simplicity, and they return in the ducal suite of the Aquitania. They carry away with them their impressions of America, and when they reach England they sell them. This export of impressions has now been going on so long that the balance of trade in impressions is all disturbed. There is no doubt that the Americans and Canadians have been too generous in this matter of giving away impressions. We emit them with the careless ease of a glow worm, and like the glow-worm ask for nothing in return.

But this irregular and one-sided traffic has now assumed such great proportions that we are compelled to ask whether it is right to allow these people to carry away from us impressions of the very highest commercial value without giving us any pecuniary compensation whatever. British lecturers have been known to land in New York, pass the customs, drive uptown in a closed taxi, and then forward to England from the closed taxi itself ten dollars' worth of impressions of American national character. I have myself seen an English literary man,—the biggest, I believe: he had at least the appearance of it; sit in the corridor of a fashionable New York hotel and look gloomily into his hat, and then from his very hat produce an estimate of the genius of Amer ica at twenty cents a word. The nice question as to whose twenty cents that was never seems to have occurred to him.

I am not writing in the faintest spirit of jealousy. I quite admit the extraordinary ability that is involved in this peculiar susceptibility to impressions. I have estimated that some of these English visitors have been able to receive impressions at the rate of four to the second; in fact, they seem to get them every time they see twenty cents. But without jealousy or complaint, I do feel that somehow these impressions are inadequate and fail to depict us as we really are.

Let me illustrate what I mean. Here are some of the impressions of New York, gathered from visitors' discoveries of America, and reproduced not perhaps word for word but as closely as I can remember them. "New York", writes one, "nestling at the foot of the Hudson, gave me an impression of cosiness, of tiny graciousness: in short, of weeness." But compare this—"New York," according to another discoverer of America, "gave me an impression of size, of vastness; there seemed to be a big ness about it not found in smaller places." A third visitor writes, "New York struck me as hard, cruel, almost inhuman." This, I think, was because his taxi driver had charged him three dollars. "The first thing that struck me in New York," writes another, "was the Statue of Liberty." But, after all, that was only natural: it was the first thing that could reach him.

Nor is it only the impressions of the metropolis that seem to fall short of reality....