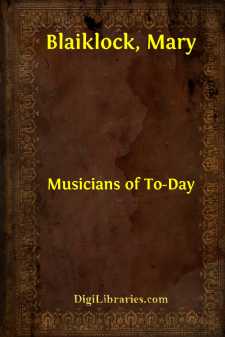 It is perhaps fitting that the series of volumes comprising The Musician's Bookshelf should be inaugurated by the present collection of essays. To the majority of English readers the name of that strange and forceful personality, Romain Rolland, is known only through his magnificent, intimate record of an artist's life and aspirations, embracing ten volumes, Jean-Christophe. This is not the place in which to discuss that masterpiece. A few biographical facts concerning the author may not, however, be out of place here.

Romain Rolland is forty-eight years old. He was born on January 29, 1866, at Clamecy (Nièvre), France. He came very early under the influence of Tolstoy and Wagner and displayed a remarkable critical faculty. In 1895 (at the age of twenty-nine) we find him awarded the coveted Grand Prix of the Académie Française for his work Histoire de l'Opéra en Europe avant Lulli et Scarlatti, and in the same year he sustained, before the faculty of the Sorbonne—where he now occupies the chair of musical criticism—a remarkable dissertation on The Origin of the Modern Lyrical Drama—his thesis for the Doctorate. This, in reality, is a vehement protest against the indifference for the Art of Music which, up to that time, had always been displayed by the University. In 1903 he published a remarkable Life of Beethoven, followed by a Life of Hugo Wolf in 1905. The present volume, together with its companion, Musiciens d'Autrefois, appeared in 1908. Both form remarkable essays and reveal a consummate and most intimate knowledge of the life and works of our great contemporaries. A just estimate of a composer's work is not to be arrived at without a study of his works and of the conditions under which these were produced. To take, for instance, the case of but one of the composers treated in this volume, Hector Berlioz. No composer has been so misunderstood, so vilified as he, simply because those who have written about him, either wilfully or through ignorance, have grossly misrepresented him.

The essay on Berlioz, in the present volume, reveals a true insight into the personality of this unfortunate and great artist, and removes any false misconceptions which unsympathetic and superficial handling may have engendered. Indeed, the same introspective faculty is displayed in all the other essays which form this volume, which, it is believed, will prove of the greatest value not only to the professional student, but also to the intelligent listener, for whom the present series of volumes has been primarily planned. We hear much, nowadays, of the value of "Musical Appreciation." It is high time that something was done to educate our audiences and to dispel the hitherto prevalent fallacy that Music need not be regarded seriously. We do not want more creative artists, more executants; the world is full of them—good, bad and indifferent—but we do want more intelligent listeners.

I do not think it is an exaggeration to assert that the majority of listeners at a high-class concert or recital are absolutely bored. How can it be otherwise, when the composers represented are mere names to them? Why should the general public appreciate a Bach fugue, an intricate symphony or a piece of chamber-music? Do we professional musicians appreciate the technique of a wonderful piece of sculpture, of an equally wonderful feat of engineering or even of a miraculous surgical operation? It may be argued that an analogy between sculpture, engineering, surgery and music is absurd, because the three former do not appeal to the masses in the same manner as music does....