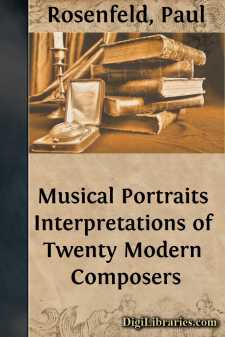 Wagner's music, more than any other, is the sign and symbol of the nineteenth century. The men to whom it was disclosed, and who first sought to refuse, and then accepted it, passionately, without reservations, found in it their truth. It came to their ears as the sound of their own voices. It was the common, the universal tongue. Not alone on Germany, not alone on Europe, but on every quarter of the globe that had developed coal-power civilization, the music of Wagner descended with the formative might of the perfect image. Men of every race and continent knew it to be of themselves as much as was their hereditary and racial music, and went out to it as to their own adventure. And wherever music reappeared, whether under the hand of the Japanese or the semi-African or the Yankee, it seemed to be growing from Wagner as the bright shoots of the fir sprout from the dark ones grown the previous year. A whole world, for a period, came to use his idiom. His dream was recognized during his very lifetime as an integral portion of the consciousness of the entire race.

For Wagner's music is the century's paean of material triumph. It is its cry of pride in its possessions, its aspiration toward greater and ever greater objective power. Wagner's style is stiff and diapered and emblazoned with the sense of material increase. It is brave, superb, haughty with consciousness of the gigantic new body acquired by man. The tonal pomp and ceremony, the pride of the trumpets, the arrogant stride, the magnificent address, the broad, vehement, grandiloquent pronouncements, the sumptuous texture of his music seems forever proclaiming the victory of man over the energies of fire and sea and earth, the lordship of creation, the suddenly begotten railways and shipping and mines, the cataclysm of wealth and comfort. His work seems forever seeking to form images of grandeur and empire, flashing with Siegfried's sword, commanding the planet with Wotan's spear, upbuilding above the heads of men the castle of the gods. It dares measure itself with the terrestrial forces, exults in the fire, soughs through the forest with the thunderstorm, glitters and surges with the river, spans mountains with the rainbow bridge. It is full of the gestures of giants and heroes and gods, of the large proud movements of which men have ever dreamed in days of affluent power. Even "Tristan und Isolde," the high song of love, and "Parsifal," the mystery, spread richness and splendor about them, are set in an atmosphere of heavy gorgeous stuffs, amid objects of gold and silver, and thick clouding incense, while the protagonists, the lovers and saviors, seem to be celebrating a worldly triumph, and crowning themselves kings. And over the entire body of Wagner's music, there float, a massive diadem, the towers and parapets and banners of Nuremberg the imperial free city, monument of a victorious burgherdom, of civic virtue that on the ruins of feudalism constructed its own world, and demonstrated to all times its dignity and sobriety and industry, its solid worth.

For life itself made the Wagnerian gesture. The vortex of steel and glass and gold, the black express-packets plowing the seven seas, the smoking trains piercing the bowels of the mountains and connecting cities vibrant with hordes of business men, the telegraph wires setting the world aquiver with their incessant reports, the whole sinister glittering faëry of gain and industry and dominion, seemed to tread and soar and sound and blare and swell with just such rhythm, such grandeur, such intoxication. Mountains that had been sealed thousands of years had split open again and let emerge a race of laboring, fuming giants. The dense primeval forests, the dragon-haunted German forests, were sprung up again, fresh and cool and unexplored, nurturing a mighty and fantastic animality. Wherever one gazed, the horned Siegfried, the man born of the earth, seemed near once more, ready to clear and rejuvenate the globe with his healthy instinct, to shatter the old false barriers and pierce upward to fulfilment and power. Mankind, waking from immemorial sleep, thought for the first time to perceive the sun in heaven, to greet the creating light....