Music As A Language Lectures to Music Students 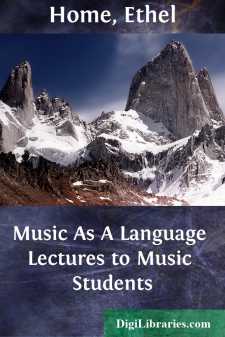 THE TRAINING OF THE MUSIC TEACHER

Let us consider the case of a young girl who has finished her school education, and has supplemented this by a special course of technical work in music, which has ended in her taking a musical diploma. She now wishes to teach. What are the chief problems which she will have to face? She must first of all make up her mind whether she wishes to confine her work to the teaching of a solo instrument, together with some work in harmony or counterpoint, along orthodox lines, or whether she wishes to be in touch with modern methods of guiding the general musical education of children, as taken in some schools in the morning curriculum. If the latter, she must enter on a course of special training.

There is also a practical reason why many who wish to teach music at the present time are entering a training department. In a paper recently issued by the Teachers' Registration Council we find the following paragraph dealing with 'Conditions of Registration':

'The applicant must produce evidence satisfactory to the Council of having completed successfully a course of training in the principles and methods of teaching, accompanied by practice under supervision. The course must extend over a period of at least one academic year or its equivalent.'

Now, those who have studied the question of the teaching of music in accordance with modern methods have realized that music provides a language, which should be used primarily for self-expression and intercourse with others. The whole of life depends on the expression of ourselves in relation to the community. 'Self-expression is a universal instinct, which can only be crushed by a course of systematic ill treatment, either self-inflicted or inflicted by others. It is self-inflicted if we conform to false standards of convention, or create for ourselves a standard of life which is out of touch with humanity as a whole. It is inflicted by others if they force us when young into a wrong educational atmosphere, and paralyse our faculties instead of developing them.

To the favoured few real creative power comes by instinct, but to a great many a small degree of this power can be given by education, and in this way an extra outlet is possible for self-expression. The child should be trained when quite young to think in terms of music, in the same way in which it is trained to think in its mother-tongue. The fundamental work should be taken in class, not at an individual lesson, and should be compulsory for all children. We do not inquire whether a child is gifted in languages before we teach him French, and we must not ask whether he is gifted in the language of music before placing him in the music class. Again, short frequent lessons are more beneficial to the young beginner than longer lessons at greater intervals, for, as a new 'sense' is being opened to the pupil, a long lesson produces an unhealthy strain.

The scheme of work to be followed in such a class will be dealt with later, but we may note here that training given in accordance with the above-mentioned aim will produce a marked increase in the vitality and general intelligence of a child. The reflex actions of intense concentration for a short time, followed by the giving out of creative work, will send a child back to its other lessons with an alert mind and with increased vigour.

A large number of schools and private families are offering posts to teachers who are able to teach along such lines. Every year the number of such posts steadily increases, and it will not be too much to predict that in the near future few schools in the first rank will be without teaching of this kind. The salaries offered are naturally higher than those obtained by the old-fashioned 'orthodox' teacher, as more has to be done, and classes have to be managed instead of individual pupils.

It is impossible to over-estimate the importance of securing plenty of experience in teaching classes of average pupils of all ages, under expert supervision. Many an apparently promising teacher has come to grief in the first post taken, because the knowledge gained has been too theoretical, and has not been checked by class experience with really average pupils....