Mushrooms of America, Edible and Poisonous

by Julius A. (Julius Auboineau) Palmer 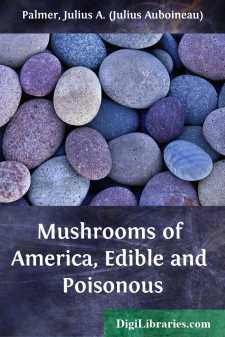 These charts are prepared for popular use, rather than for students of botanical science; all technical terms are, therefore, as far as possible, avoided.

The names "mushroom" and "toadstool" are indefinite, are both applied with equal reason to any fleshy fungus, and are here used as synonymes, like the corresponding term "plant" and "vegetable," or "shrub" and "bush," in common conversation.

No general test can be given by which a poisonous mushroom may be distinguished from an edible mushroom. But each species of fungus has certain marks of identity, either in appearance, quality, or condition of growth, which are its own, and never radically varied; none can contain a venomous element at one time, and yet be harmless under other conditions. Like other food, animal or vegetable, however, mushrooms may, by decay or conditions of growth, be unfit for table use; yet in this state no fatality would attend such use.

Therefore the identification of species is a safe guide, and is the only means of knowing what mushrooms should be eaten, and what varieties of fungus should be rejected. Having once learned to distinguish any species of mushrooms as esculent, perfect security may be felt in the use of that species wherever and whenever found; but any specimen varying from the type in the slightest degree should be rejected by an amateur.

There are about one thousand varieties of mushrooms (exclusive of small or microscopic fungi) native to the United States; many will therefore be found which are not represented on either of these plates. Those here depicted are of three classes, namely, the Lycoperdaceæ, or Puff-ball fungi; the Agaricini, or Gill-bearing fungi; and the Boleti, which last is one division of the Polyporei, or Pore-bearing fungi.

The following definitions are here given, and will be found necessary:—

PILEUS. The expanded disk or cap of the mushroom or toadstool.

GILLS. The thin plates set on their edges under the pileus, running to a common centre at the stem.

TUBES. The spongy collection of pores which take the place of gills under the pileus of a Boletus.

VEIL. A web or membrane which extends from the margin of the pileus to the stem when the mushroom is young, and thus encloses the gills.

RING. A part of the veil adherent to the stem, and forming a collar around it.

VOLVA. The sheath or wrapper enclosing the young mushroom, when below or just above the ground; the remains of which are found in the ring, the veil, at the base of the stem, and in the warty or scurfy top of some varieties of mushrooms.

SPORES. The reproductive bodies, analogous to seeds in some other plants, found under the caps of the Agaricini and Boleti, and appearing like fine dust when the cap is left for a time lying under-side downward.

There are as many different flavors and tastes among esculent fungi as are found in any other varieties of diet, and the very general ignorance of this fact is a sufficient reason for the issue of this work. Many persons claim to know a mushroom from a toadstool. This means that there is one variety out of a thousand of which they eat with safety, and it means nothing more. A person might as well select one fish from the sea, and avoid all other members of the finny tribe on the ground that there are poisonous fishes....