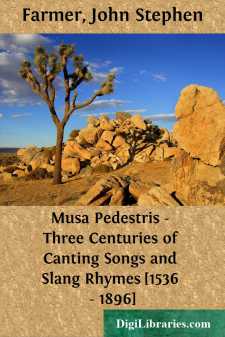 When Harrison Ainsworth, in his preface to Rookwood, claimed tobe "the first to write a purely flash song" he was very wide of themark. As a matter of fact, "Nix my doll, pals, fake away!" had beenanticipated, in its treatment of canting phraseology, by nearly three centuries, and subsequently, by authors whose names stand high, in other respects, in English literature.

The mistake, however, was not altogether unpardonable; few, indeed, would have even guessed that the appearance of utter neglect which surrounded the use of Cant and Slang in English song, ballad, or verse—its rich and racy character notwithstanding—was anything but of the surface. The chanson d'argot of France and the romance di germania of Spain, not to mention other forms of the MUSA PEDESTRIS had long held popular sway, but there was to all appearance nothing to correspond with them on this side the silver streak.

It must be confessed, however, that the field of English slang verse and canting song, though not altogether barren, has yet small claim to the idiomatic and plastic treatment that obtains in many an Argot- song and Germania-romance; in truth, with a few notable exceptions, there is little in the present collection that can claim literary rank.

Those exceptions, however, are alone held to be ample justification for such an anthology as that here presented. Moreover these "Rhymes and Songs", gathered from up and down the years, exhibit, en masse, points of interest to the student and scholar that, in isolation, were either wanting altogether, or were buried and lost sight of midst a mass of more (or less) valuable matter.

As regards the Vulgar Tongue itself—though exhaustive disquisition obviously lies outside the scope of necessarily brief forewords—it may be pointed out that its origin in England is confessedly obscure. Prior to the second half of the 16th century, there was little trace of that flood of unorthodox speech which, in this year of grace eighteen hundred and ninety-six, requires six quarto double-columned volumes duly to chronicle—verily a vast and motley crowd!

As to the distinction to be drawn between Cant and Slang it is somewhat difficult to speak. Cant we know; its limits and place in the world of philology are well defined. In Slang, however, we have a veritable Proteus, ever shifting, and for the most part defying exact definition and orderly derivation. Few, save scholars and such-like folk, even distinguish between the two, though the line of demarcation is sharply enough defined.

In the first place, Slang is universal, whilst Cant is restricted in usage to certain classes of the community: thieves, vagrom men, and— well, their associates. One thing, indeed, both have in common; each are derived from a correct normal use of language. There, however, all similarity ends.

Slang boasts a quasi-respectability denied to Cant, though Cant is frequently more enduring, its use continuing without variation of meaning for many generations. With Slang this is the exception; present in force to-day, it is either altogether forgotten to-morrow, or has shaded off into some new meaning—a creation of chance and circumstance....