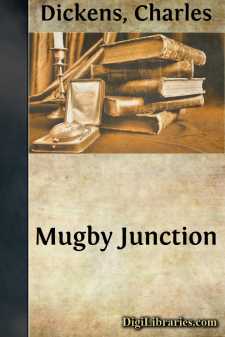 “Yes, it generally does, sir.”

“Is it a rainy night still?”

“You’ll have, sir,” said the guard, glistening with drops of wet, and looking at the tearful face of his watch by the light of his lantern as the traveller descended, “three minutes here.”

“Thought you had a through ticket, sir?”

“So I have, but I shall sacrifice the rest of it.  I want my luggage.”

“Please to come to the van and point it out, sir.  Be good enough to look very sharp, sir.  Not a moment to spare.”

“Those two large black portmanteaus in the corner where your light shines.  Those are mine.”

“Mugby Junction!” said the traveller, pulling up the woollen muffler round his throat with both hands.  “At past three o’clock of a tempestuous morning!  So!”

He stood unnoticed on the dreary platform, except by the rain and by the wind.  Those two vigilant assailants made a rush at him.  “Very well,” said he, yielding.  “It signifies nothing to me to what quarter I turn my face.”

Thus, at Mugby Junction, at past three o’clock of a tempestuous morning, the traveller went where the weather drove him.

Not but what he could make a stand when he was so minded, for, coming to the end of the roofed shelter (it is of considerable extent at Mugby Junction), and looking out upon the dark night, with a yet darker spirit-wing of storm beating its wild way through it, he faced about, and held his own as ruggedly in the difficult direction as he had held it in the easier one.  Thus, with a steady step, the traveller went up and down, up and down, up and down, seeking nothing and finding it.

A place replete with shadowy shapes, this Mugby Junction in the black hours of the four-and-twenty.  Mysterious goods trains, covered with palls and gliding on like vast weird funerals, conveying themselves guiltily away from the presence of the few lighted lamps, as if their freight had come to a secret and unlawful end.  Half-miles of coal pursuing in a Detective manner, following when they lead, stopping when they stop, backing when they back.  Red-hot embers showering out upon the ground, down this dark avenue, and down the other, as if torturing fires were being raked clear; concurrently, shrieks and groans and grinds invading the ear, as if the tortured were at the height of their suffering.  Iron-barred cages full of cattle jangling by midway, the drooping beasts with horns entangled, eyes frozen with terror, and mouths too: at least they have long icicles (or what seem so) hanging from their lips.  Unknown languages in the air, conspiring in red, green, and white characters.  An earthquake, accompanied with thunder and lightning, going up express to London.  Now, all quiet, all rusty, wind and rain in possession, lamps extinguished, Mugby Junction dead and indistinct, with its robe drawn over its head, like Cæsar....