Mrs. Skagg's Husbands and Other Stories 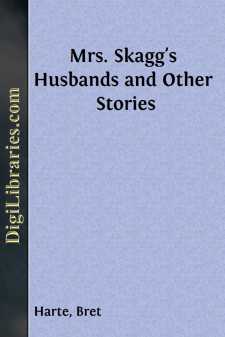 The sun was rising in the foot-hills. But for an hour the black mass of Sierra eastward of Angel's had been outlined with fire, and the conventional morning had come two hours before with the down coach from Placerville. The dry, cold, dewless California night still lingered in the long canyons and folded skirts of Table Mountain. Even on the mountain road the air was still sharp, and that urgent necessity for something to keep out the chill, which sent the barkeeper sleepily among his bottles and wineglasses at the station, obtained all along the road.

Perhaps it might be said that the first stir of life was in the bar-rooms. A few birds twittered in the sycamores at the roadside, but long before that glasses had clicked and bottles gurgled in the saloon of the Mansion House. This was still lit by a dissipated-looking hanging-lamp, which was evidently the worse for having been up all night, and bore a singular resemblance to a faded reveller of Angel's, who even then sputtered and flickered in HIS socket in an arm-chair below it,—a resemblance so plain that when the first level sunbeam pierced the window-pane, the barkeeper, moved by a sentiment of consistency and compassion, put them both out together.

Then the sun came up haughtily. When it had passed the eastern ridge it began, after its habit, to lord it over Angel's, sending the thermometer up twenty degrees in as many minutes, driving the mules to the sparse shade of corrals and fences, making the red dust incandescent, and renewing its old imperious aggression on the spiked bosses of the convex shield of pines that defended Table Mountain. Thither by nine o'clock all coolness had retreated, and the "outsides" of the up stage plunged their hot faces in its aromatic shadows as in water.

It was the custom of the driver of the Wingdam coach to whip up his horses and enter Angel's at that remarkable pace which the woodcuts in the hotel bar-room represented to credulous humanity as the usual rate of speed of that conveyance. At such times the habitual expression of disdainful reticence and lazy official severity which he wore on the box became intensified as the loungers gathered about the vehicle, and only the boldest ventured to address him. It was the Hon. Judge Beeswinger, Member of Assembly, who to-day presumed, perhaps rashly, on the strength of his official position.

"Any political news from below, Bill?" he asked, as the latter slowly descended from his lofty perch, without, however, any perceptible coming down of mien or manner.

"Not much," said Bill, with deliberate gravity. "The President o' the United States hezn't bin hisself sens you refoosed that seat in the Cabinet. The ginral feelin' in perlitical circles is one o' regret."

Irony, even of this outrageous quality, was too common in Angel's to excite either a smile or a frown. Bill slowly entered the bar-room during a dry, dead silence, in which only a faint spirit of emulation survived.

"Ye didn't bring up that agint o' Rothschild's this trip?" asked the barkeeper, slowly, by way of vague contribution to the prevailing tone of conversation....