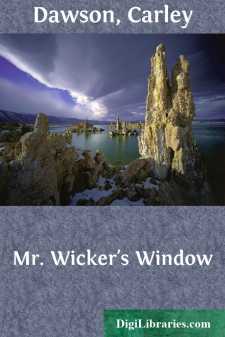 hristopher Mason felt numb. It seemed to him that he was as good as an orphan already, for his father, a Commander in the Navy, was far away at sea, and Chris's mother was in a hospital, not expected to live.

Chris scuffed along the brick pavements of Georgetown, but he did not, as he usually did, look about at its familiar houses. This friendly core of the growing city of Washington, D.C., today seemed to him almost hostile.

Georgetown, where Chris lived, is the oldest part of the capital city, built by early English settlers long years before Washington itself was even planned. Grouped at the head of the navigable part of the Potomac River, above Georgetown's bluffs, the Potomac foams and dashes over wild rocks and waterfalls, and across the river, the country starts.

Chris had just left his mother's sister, his Aunt Rachel. Aunt Rachel, white-faced, was preparing to go to the hospital to be with his mother and had asked him, "Don't you want to come too, Chris? For a little while?" But a cold-edged wing of fear had brushed the boy like a bat wing in the night. He had shaken his head, speechless, grabbed his sweater, and slammed the front door.

Now he hesitated on a corner, suddenly dismayed, not knowing quite where to go or what to do. The whole city with its white marble buildings and templed memorials, its elm-lined avenues, seemed all at once very empty.

He looked down to the Potomac, always, for Chris, just "the river," where it glinted distantly blue and silver at the end of the street. Factories along the riverbank cut off all but the farthest stretches of water as the river moved under bridge after bridge beside the banks of Maryland and Virginia.

Chris made up his mind to see what might be in the Pep Boys' store, far down the hill and along traffic-filled M Street. Somehow the tawdry bustle of this street, with its many shops, appealed to the boy who carried misery inside him like a cold, heavy stone. Running, he started down the hill between the lines of old brick houses, left Rock Creek Park behind him, and turning to the right up M Street, reached the hardware glitter of The Pep Boys'.

And it was there, as he stood staring in at the chromium bicycle lamps, red glass tail lights, and wire baskets, that Mike Dugan found him.

ike was in his class at public school, the eighth grade. Mike was all right. Chris liked him.

"Say—you know sumthin'?" Mike wiggled himself across part of the Pep Boys' window to gain Chris's attention. "Old Wicker's got a sign in his window—he needs a boy. For after school, I guess. Think he'd pay, huh? Whyncha try?"

Chris looked from a nickel-plated flashlight to a car jack and spark plug.

Mike persisted. "Well, I'll tell you what. Know who needs a job bad? That's Jakey Harris. His mother's sick, and he's got that bad foot. Whyncha ask for him, huh? You sit next to him at school."

All Chris heard was "—needs a job bad—mother's sick."