Mr. Punch Awheel The Humours of Motoring and Cycling 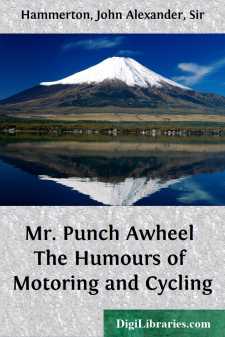 One of our special correspondents started out to try the effect of taking notes from his motor-car whilst proceeding at top-speed. The experiment took place in June; but we have only just received the following account of the result.

"Started away and turned on full head of smell—steam, I mean. Over Southwark Bridge, fizz, kick, bang, rattle! Flew along Old Kent Road; knocked down two policemen on patrol duty ('Knocked 'em in the Old Kent Road'); fizzed on through New Cross and Lewisham at awful nerve-destroying, sobbing pace, 'toot toot-ing' horn all the way. No good, apparently, to some people, who would not, or possibly could not, get out of the way. Cannoned milk-cart entering Eltham village, ran into 'bus, but shot off it again, at a tangent, up on to the footpath, frightening old lady into hysterics. Onwards we went, leaping and flying past everything on the road, into open country. Ran over dog and three chickens, and saw tandem horses take fright and bolt; dust flew, people yelled at us and we yelled at people. Came round sharp corner on to donkey standing in road. 'Boosted' him up into the air and saw him fall through roof of outhouse! Whirr-r-up! bang! rattle! fizz-izz—Bust!

"Where am I?—Oh, in hospital—oh, really?—Seems nice clean sort of place.—How long——? Oh, been here about six weeks—have I, really? And what——? Oh, both arms, you say?—and left leg? Ah—by the way, do you know anyone who wants to buy a motor——? What, no motor left?—By Jove! that's funny, isn't it?—Well, I think I'll go to sleep again now."

Mabel. "Person who drives an auto-car, of course, silly."

The Best Lubricant for Cycles.—Castor oil.

"No. I wouldn't be seen on one. I don't think they're nice for lidies!"

What rushes through the crowded street

With whirring noise and throbbing beat,

Exacting toll of life and limb,

Who flies before the oily gust

Wafted his way through whirling dust,

And hopes the beastly thing will bust?

Who thinks that it is scarcely fair

To have to pay for road repair

While sudden death lies lurking there?

Who as the car goes whizzing past

At such law-breaking stands aghast,

(For forty miles an hour is fast)?

Who hears the case with bland surprise,

And over human frailty sighs,

The while he reads between the lies?

"And only yesterday I was fined five pounds for driving at excessive speed!"

Fair Cyclist. "Is this the way to Wareham, please?"

So Unselfish!—"Oh yes, I gave my husband a motor-car on his birthday."