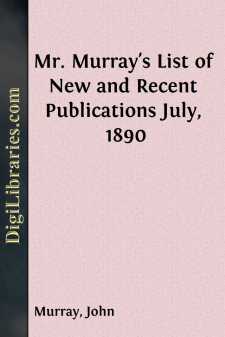 "The book is eminently worthy of the great attention it has received. It puts the case of the Southern planters in a very rational and most interesting light. It may be described as the very antipodes to 'Uncle Tom's Cabin.' The picture of the rich, affluent patriarchal life, with woodlands, pastures and countless flocks, the master exercising paternal care over the slaves, and the planter's wife, working harder for her slaves than any slave could work, is extremely interesting and attractive. Then we have some striking pictures of the war between Federals and Confederates, and of the tremendous results. But the main charm of the book is the character of Thomas Dabney himself, who might, as a reality, be compared with some famous characters in fiction, with the Doctor Primrose of Goldsmith, or the Père Madelon of Victor Hugo.... Mr. Gladstone has done well in drawing attention to his character and his story."--Literary Churchman.

FOUR YEARS' TRAVELS IN AUSTRALIA. AND CAMP LIFE WITH THE ABORIGINES OF QUEENSLAND.

By CARL LUMHOLTZ, M.A.,Member of the Royal Society of Science of Norway.

"Mr. Lumholtz has a very pleasant and modest style of narrative, so that the whole book is as agreeable as it is instructive; but the portion most attractive from its novelty is that which details his proceeding when, for nearly a year, he lived alone among 'a race of people whose culture--if, indeed, they can be said to have any culture whatever--must be characterised as the lowest to be found among the whole genus homo sapiens.' The volume is one of the most complete of its kind in all respects, and a worthy record of the steadfast enterprise of a hardy Norseman in the Scientific Age. It should be specially remarked that he effaces himself more than most travellers; yet we can infer from the style and fine temper of his narrative that he belongs to the higher class of scientific explorers."--Spectator.

A NATURALIST'S VOYAGE ROUND THE WORLD.

WITH MAPS AND UPWARDS OF 100 ILLUSTRATIONS OF THE PLACES VISITED AND DESCRIBED.

Chiefly from Sketches taken on the Spot by ROBERT TAYLOR PRITCHETT.Medium 8vo. 21s.

*.* The object of this edition is to aid the author's description by actual representations of the most interesting places and objects of Natural History referred to in them. This has been effected by securing the service of an artist who has visited the countries which Darwin describes.

"This is an edition de luxe of the first work written by our great naturalist. Anybody who has read it is not likely to have forgotten it. It is a kind of natural history 'Robinson Crusoe.' It was during that famous voyage that Darwin made the observations and laid the foundation for his famous theory of Natural Selection. The present edition is by far the best and most attractive hitherto published....