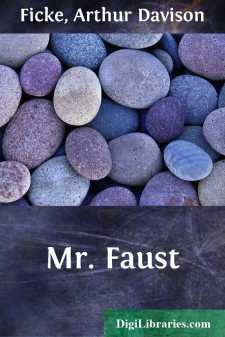 Through all the work of Arthur Davison Ficke runs a note of bigness that compels attention even when one feels that he is still groping both for form and thought. In "Mr. Faust" this note has assumed commanding proportions, while at the same time the uncertainty manifest in some of the earlier work has almost wholly disappeared. Intellectually as well as artistically, this play shows a surprising maturity. It impresses me, for one, as the expression of a well-rounded and very profound philosophy of life—and this philosophy stands in logical and sympathetic relationship to what the western world to-day regards as its most advanced thought. The evolutionary conception of life is the foundation of that philosophy, which, however, has little or nothing in common with the materialistic and dogmatic evolutionism of the last century. The work sprung from that philosophy is full of the new sense of mystery, which makes the men of to-day realize that the one attitude leading nowhere is that of denial. Faith and doubt walk hand in hand, each one being to the other check and goad alike. And with this new freedom to believe as well as to question, man becomes once more the centre of his known universe. But there he stands, humbly proud, not as the arrogant master of a "dead" world, but merely as the foremost servant of a life-principle which asserts itself in the grain of sand as in the brain of man.

Yet "Mr. Faust" is by no means a philosophical or moral tract. It is, first of all and throughout, a living, breathing work of art, instinct with beauty and faithful in its every line to the principle laid down by its author in the preface to one of his earlier volumes: "Poetical imagination must fail altogether if it descends from its natural sphere and assumes work which is properly that of economic or political experience. Nor can it usefully urge its own peculiar intuitions as things of practical validity."

Mr. Ficke was born in 1883 at Davenport, Iowa, and there he is still living, although I understand that he has since then been wandering in so many other regions, physical and spiritual, that he can hardly call it his home. He graduated from Harvard in 1904 and spent the next travelling in all sorts of strange and poetic places—Japan, India, the Greek mountains, the Aegean Islands. Returning to the United States, he studied law and was admitted to the Bar in 1908. While studying, he taught English for a year at the University of Iowa, lecturing on the history of the Arthurian Legends.

He was a mere boy when he began to write, turning from the first to the metrical form of expression and remaining faithful to it in most of his subsequent efforts. His poems and essays have been printed in almost all the leading magazines. So far he has published five volumes of verse: "From the Isles," a series of lyrics of the Aegean Sea; "The Happy Princess," a romantic narrative poem; "The Earth Passion," a series of poems which may be characterized as the effort of a star-gazer to find satisfaction in the things of the earth; "The Breaking of Bonds," a Shelleyan drama of social unrest, where he has tried to formulate a hope for our final emergence from the maelstrom of class-conflict; and "Twelve Japanese Painters," a group of poems expressive of the peculiar and alluring charm of the great Japanese painters and their world of remote beauty....